Advertising Week Walk of Fame Wants You! (To Vote) 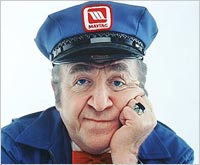 The election is coming. No, not the one in November, but the one involving less fractious parties in early October. Yes, it's nearly time again for the 9th annual Advertising Week in New York, and big brands are vying for cherished spots on the Madison Avenue Advertising Walk of Fame, where slogans, icons, and mascots get street cred -- literally.

A national vote starts today on photo site BuzzFeed.com. Voting closes Sept. 30 at midnight, with winners to be inducted into the Walk of Fame Oct. 1 during Advertising Week, with a permanent presence on Madison Avenue between 42nd and 50th streets.

Who's up for election? Target’s “Crazy Christmas Lady,” Sundrop Soda’s “Drop It Like It’s Hot Girl,” and the “Orbit Gum Girl” from Wrigley’s are are up there, according to a release from the Adweek folks. Allstate’s Mayhem and The Coca-Cola Polar Bears are vying for a permanent spot on above the sidewalk.

On the slogan side, Royal Caribbean’s “The Sea is Calling” and “When Colors Mean This Much You Can Only Trust Tide” will also compete for advertising’s top prize, joining the ranks of past Walk of Fame inductees “What Happens Here, Stays Here” from the Las Vegas Convention and Visitors Bureau, in addition to “What’s In Your Wallet” from Capital One.

"Going back to 2004 when we first started, what we have tried to do is mix classic and contemporary; and by design, we work to freshen it up every year," says Matt Scheckner, Advertising Week executive director. He tells Marketing Daily that unlike that more portentous election in November, the Walk of Fame is meant to be lighthearted, since it is the one consumer-facing aspect of Advertising Week. "We try to make it interesting. I love that you have Smoky the Bear and The Most Interesting Man, and an icon like the Maytag Man who has never won before at the same time." Winners get permanent banners on Madison Avenue via a deal with the Grand Central Partnership Building Improvement District.

How about slogans? Here are some: AmEx's "Don’t Leave Home Without It," Bombardier's "We Move People," DeBeers' "A Diamond is Forever," "The Best Part of Waking Up is Folger’s in Your Cup," Gatorade's "Is It In You?", "It’s Not TV, It’s HBO," "What Would You Do for a Klondike Bar?", Vegas' Convention and Visitor Center's  "What Happens Here, Stays Here," MLB's "I Live for This," "I Want My MTV," "Just Do It," and "Our Blades are F***ing Great" (Dollar Shave Club)

"What the icons and slogans do is make people smile, and we always do something zany as part of it," says Scheckner. Past events have included a midtown perambulation of icons (costumed people). Brands get involved to the extent that they galvanize their fans to vote on social media. He says every year the unexpected happens, such as Colombia's response to Juan Valdez having won a few years back.

There hasn't been a parade of brands in several years, but this year there will be something a little different, involving the central New York Public Library at Bryant Park. Suggestion: return your overdue books before Oct.1, to be safe.