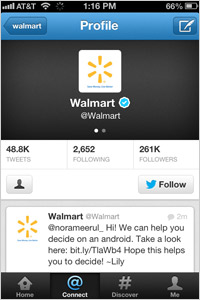 If you were at Walmart this past Saturday you may have noted more than a few people using their various mobile devices to check in. Not that you got that close to observe the details of what fellow Walmart shoppers were doing on their smartphones. But according to a new LocalResponse study of retail-related check-ins across Twitter, Yelp, Foursquare, Instagram and other social mobile services, Saturdays account for 25.9% of check-ins for the top 10 retailers. Friday was second at 19.7%. And Sunday was trailing at 14.3%. Which is also to say that about 60% of social shopping check-ins are occurring in the weekend period. And for some reason, checking in is an afternoon thing, with activity peaking between 2 p.m. and 3 p.m. Eastern Time. Friday evenings and Saturday later in the afternoon are also hot spots.

Among the major retailers, Walmart has a commanding presence on the social shopping ecosystem, accounting for 38.3% of check-ins among top ten retailers. That is more than double the next-closest competitor -- Target at 15.4%. Costco rounds out the top three with 9.3%.

Checking in still skews slightly male (54%), but at certain retailers like Walmart, the split is closer to even (51% male, 49% female). Target is especially strong with women, where they account for 53% of check-ins.

Retailers of different stripes also have different levels of presence on the various social mobile nets. For instance, Walmart had the highest share of Twitter check-ins (29.4%), but Walgreens apparently owns Foursquare, with 94% of check-ins. But Walgreens’ presence on Foursquare also shows the power of the exclusive deal. The two companies started last spring to allow check-in customers to access deals and coupons directly in the Foursquare app that could be redeemed at checkout with a scannable barcode.

Walmart’s strength on Twitter is not a natural consequence of the retailer’s size, either. Check out its Twitter feed to see how the company engages in helpful advice and Q&A with customers. Need jeans? They suggest a link. Don’t have a credit card? They direct you to multiple types of payments. The company treats its Twitter feed as something richer than a promotional tool, encouraging the kinds of interaction that invite persistent checking in.

According to LocalResponse, which scours millions of check-ins across the various social nets, the share of check-ins among the top ten retailers breaks down this way: