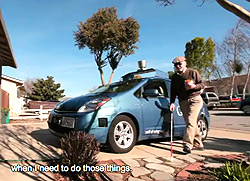 I recently received an interesting perspective on Google's self-driving cars from someone who has been in law enforcement for more than 25 years. On Tuesday, California Gov. Jerry Brown signed a bill that would allow driverless cars to operate on the state's roads.

Self-driving vehicles operated by computers might seem like an emerging technology, but for years the aviation industry has relied on fly-by-wire flight control systems, where computers navigate the airplanes. Computers determine how the plane moves without the input from the pilot. Originally created as a safeguard, signals indicating the plane's air flight pattern get transmitted and saved on a server. Will Google's self-driving cars do the same?

While Google co-founder Sergey Brin spearheads a team working on innovations other than search technology, such as self-driving cars and eyeglasses combining virtual with reality, it's not clear whether he thinks beyond the safety requirements needed to get the car from point A to point B without a crash. A self-driving car creates a much better world for those with disabilities, such as the 95% blind Steve Mahan, but I hope Google builds in safeguards to protect free enterprise from those who want to take advantage of innovation.

Dear Mr. Brin: will the cars become available to anyone willing to plunk down the cash? Will consumers need a background check before purchasing this car, similar to what's required when purchasing a gun? Will the cars have a satellite connection to a cloud server that maps and records the motor vehicle's path? If yes, how do privacy implications come into play? What safeguards will manufacturers build into the self-driving cars to prevent drug or gun trafficking, terrorist attacks or any other related illegal activity crossing U.S. borders?

It might seem a bit farfetched, but this driverless car providing many benefits for those unable to drive themselves will need built-in safeguards such as the connection to a cloud server recording road movement and interior cameras that record activities inside the car. It also opens the door to Android app developers.