iPhone 5's Speed Thrills, Except When It Doesn't 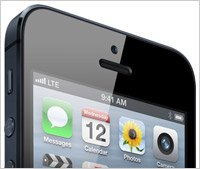 My iPhone 5 finally made its way from the strife-ridden factories in China to my doorstep yesterday. Who knew that UPS could deliver both gadgets and a dose of middle-class liberal guilt?

Somehow I got past that.

Because our content at Mediapost and Mobile Marketing Daily is aimed at the marketing and media industries, we try not to cover gadgets as gadgets. There are more than enough tech geeks on the Web to do that. I have always been more focused on how the latest mobile devices affect the marketers’ available ad palette and channels of contact with consumers and how the new screens extend media experiences. But in the case of mobile devices it gets harder to separate technology from content. Part of the Apple core genius is the understanding that ease of use, transparency of interface, and seamless integration of all parts actually adds up to a deeper engagement with content. The iPad probably demonstrated that idea better than anything in my memory.

And so, with the iPhone 5 the principal value-add here for media and marketers may not be the surface changes -- namely the slightly bigger screen. The raw speed actually is the most impressive part of the iPhone 5 and the one that may have more impact on content consumption than a larger visual canvas.

From camera starts to app launches to overall site downloads, this thing just blazes. And it matters.

It means that when I go into iTunes to sample music or movie trailers, I am getting closer to instant on than I imagined a year ago. Media sampling is not inhibited by lag. Using both WiFi (kinda) and even a weak LTE signal, I was watching "The Avengers" trailer within three seconds of tapping the play button. The song samples under an iTunes album listing were so instantaneous that I could just ratchet through the album in seconds. And this isn’t just network speeds. This is the foundational speed of the device and all of its operations.

For marketers, it means that a prompt to "watch the video" will not make the user think twice because of lag.

Some reviewers have been gushing about the iPhone 5 being in a league of its own or as the closest we have come to a “perfect smartphone.” I am sure they won’t feel this way in a year, and I don’t much care for hyperbole. But what is genuinely impressive about this device is a new level of seamlessness and ease to all the operations that smartphones have given us thus far. Wireless platforms always suffered the inherent consumer impression that they were diminished experiences from the Web -- because of screen size, but especially because of bandwidth. The iPad helped convince us that in fact, there are better ways of coming at the Internet than a desktop browser, but I personally still find the experience diminished by a certain sluggishness. The iPhone 5 is the first mobile device, especially in the smartphone category, that seems to erase the “wireless effect.” It is that fast.

In fact, the biggest problem with iPhone 5 and iOS 6 seems to be a real WiFi issue. As the Apple support boards suggest, many people are having problems -- as am I -- with uneven WiFi speeds and connectivity. The problem was already clear on my iPad for the past week, and it is actually more pronounced on the iPhone 5, where data simply stalled even feet away from the router.

Luckily, I am grandfathered into AT&T’s unlimited data, because in most of my quick tests the LTE channel delivered superior snappiness throughout to my own WiFi link to a broadband pipe.

Apple has more than maps to work on.