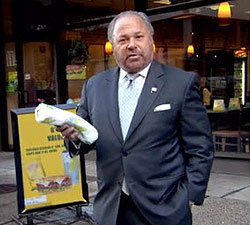 Arby’s is rolling out a brand relaunch, including an updated logo, new campaign and redesigned site.

The tagline conveys the sandwich chain’s pride in having been freshly slicing its meats in its stores for nearly 50 years, said Russ Klein, who became CMO of Arby’s Restaurant Group in January.

The accompanying U.S. campaign, “Slicing Up the Truth About Freshness,” also stresses that message, while taking shots at much-larger competitor Subway and its “Eat Fresh” slogan. (Arby’s has more than 3,500 restaurants system-wide. Subway has nearly 37,800 worldwide, including 27,000 in North America.)

While Subway’s name isn’t mentioned, in one spot, Dietl is seen in front of a Manhattan Subway location, then in front of a factory-like building in Iowa where “they” slice their meat. Voiceover: “Arby’s slices fresh in store, not in a factory.”

The spots, directed by Larry Charles -- director of “Borat” and “Religulous,” among other movies -- launched on Sept. 30 and will be airing on primetime shows including “Revolution,” “Ben and Kate,” “Animal Practice,” “Glee,” “Modern Family,” “X-Factor,” “The Voice” and “Revenge,” as well as on late-night shows.

It targets the 20% of Arby’s customers who account for two-thirds of its total transactions – consumers who eat at Arby’s about 6 out of the 50 times they eat out per month, Klein told Bloomberg.com.

Roark Capital Group bought 81.5% of Arby’s in July 2011 for about $130 million in cash. Since then, Arby’s has been revamping its menu -- including introducing a value menu and bringing back favorites like its Reuben sandwich-- closing under-performing stores , and signing new franchisees, notes The Atlanta-Journal Constitution.

Renovations of company-owned stores will begin in test markets at year-end.

Since early 2011, Arby’s had been running a “Good Mood Food” campaign from BBDO New York.