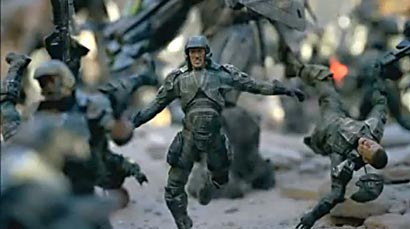 The famous screenwriting guru Robert McKee says "story, story, story." It's all about the story. Rob Schwartz, global creative president at TBWA\Chiat\Day says the same thing vis a vis advertising. He laid it out during an Advertising Week talk that preceded a wildly entertaining discussion with agency writers and creatives Kathy Hepinstall and Ted Royer about how brands and agencies use and misuse storytelling.

If the great brands have great stories, what are the archetypes? Schwartz argued there are seven basic ideas that drive good stories in marketing communications (though the last two are sort of à la carte): overcoming the monster; rebirth; the quest; the journey into the wilderness and the return, rags to riches, tragedy, and comedy.

The iconographic ad for overcoming the monster is the David and Goliath Apple ad we've all heard of. And, he argued that Audi's struggle to overcome German rival Mercedes-Benz counts, as does the AmEx "Small Business Saturday" idea from Crispin, where Black Friday and its exploitation by Walmart are the monsters. "And there's Virgin," he said. "I was just in Heathrow, and Virgin is overcoming this monster that is British Airways: if you go through BA terminal, Virgin has ads everywhere that there's a better way to fly."

The iconic non-advertising example of rebirth? "It's a Wonderful Life," with George Bailey getting a glimpse of what life would be like without him, and realizing his life matters. Schwartz said his own agency has an example in the Gatorade "Replay" campaign where players who hadn't played in 15 years got back in shape to revisit football rivalries from their younger days.

Quest would be a "Lord of the Rings"-type effort requiring a terrible journey, and some nearly insurmountable obstacles. "Two brands that have had quests for a long time are IBM and Lexus, the latter with its 'Relentless pursuit of perfection,' and IBM's 'Let's Build a Smarter Planet.' The quest might be impossible, but you try," he said.

The best rags-to-riches story in ads, in Schwartz' view? Chrysler's "Imported from Detroit" campaign that launched with Eminem, which says, defiantly, that Detroit is back, with advertising arguing that Detroit is a hard scrabble town that can pick itself up and get back in the game.

Tragedy, he noted, is a favorite thematic deployment of pro-bono campaigns like those from the Legacy Foundation against smoking and for a recent, shocking campaign against drunk driving that graphically illustrates how "not everyone who gets hit by a drunk driver dies." One print ad shows, in the lower corner, a yearbook photo of a beautiful young woman. The dominant photo, though, is of her utterly unrecognizable aspect after she had been horribly burned in a collision with a drunk driver. She has no face.

That was as good a time as any to bring on Kathy Hepinstall, a best-selling novelist who has worked at a number of agencies, including Wieden and Kennedy (on accounts like Nike), and TBWA/Chiat where she worked with Schwartz; and Ted Royer, ECD at Droga5.

Hepinstall cited a book she'd just read, "Wired for Story," which argues humans are neurochemically inclined to respond to a good story. "Yes, the most successful ads involve a story," she said, "Even if it's one everyone joins in to make, as is becoming the case more and more often."

Royer joked that he pretty much felt that, in general, every ad's story was "Life sucks, buy our product and life is better." "Remember the first episode of 'Mad Men'? Don Draper said 'we are just selling happiness.' But to sell to the client successfully, you have to bring them  along in a story," he said, adding that his idea of the perfect story ad is the campaign for the digital console sci-fi game Halo, with metal figurines that somehow elevated the main character while telling what the game was about and what the stakes were.

Meanwhile, Hepinstall argued that new media allows marketers to tell slightly longer stories. "And the bigger theme is that brands are stories. They want to embody a story. we don't want to take a brief, we want to go back to why company was started." But the big risk carried by the proliferation of social media is that consumers can easily take control of the brand story if marketers don't know what they are doing. A great example being a social media campaign from Shell, asking people to make digital cards about the oil giant's efforts in the Arctic and about polar bears. "They lost control of their story," she said, citing some hilariously caustic examples. "One person wrote, 'Let the polar bears die, let's drill for oil." Ouch.

"Technology is our friend, and we are screwed," she said, with Royer adding that there is a tendency with new technology to "fondle the hammer," or to be so enamored of the technology that you forget to tell the story. "And if consumers think your story is bullshit, they will call you on it."