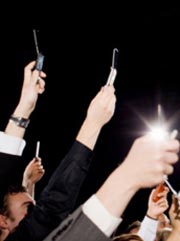 As the presidential race enters its final few weeks, a new survey finds that significant numbers of Americans voters are using their mobile devices to get information about the 2012 election and interact with campaigns and other voters.

The study by the Pew Research Center’s Internet & American Life Project showed that 88% of registered voters have a cell phone, with Republicans slightly more likely to have one than Democrats: 90% to 85%. Some 27% of voters with a mobile phone have used it to keep up with news related to the election itself or to political issues in general.

Among the three-quarters of people in this group who use text-messaging:

-19% have sent text messages related to the campaign to friends, family members, or others

Pew estimates that about half (48%) of registered voters with a cell phone have a smartphone. When it comes to smartphone owners specifically, the study found these users are employing their devices as tools for political participation and fact-checking campaign statements:

The study, however, found only 8% of app users have used apps from a candidate, political party, or interest group to get information or updates about the campaign. That may come as unwelcome news to President Obama and Mitt Romney, both of whose campaigns have each released their own apps.

Younger smartphone users are more politically active on their devices than older ones. Compared to those over 50, smartphone owners 18-49 are much more likely to read other people’s political comments on a social site (52% vs. 30%), to post their own on comments (22% vs. 12%) and to use their device to look up further information about political statements they’ve heard (43% vs. 19%).

The Pew study findings are based on a nationally representative phone survey of 1,005 adults (ages 18+) conducted September 20-23, 2012. The sample included 872 cell owners, 731 of whom are registered voters.