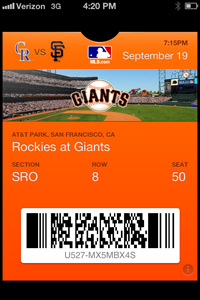 In a very early indication that Apple iPhone’s new virtual wallet app could be a powerful driver of very real sales, MLB.com reports that 12% of recent online game ticket buyers opted to have their e-tickets delivered to their iOS 6 Passbook app.

The Passbook delivery option was enabled for only four ball clubs for only the last two weeks of this baseball season. And yet over 1500 e-tickets were sent to the iPhone app for redemption at ballparks for The San Francisco Giants, Kansas City Royals, New York Mets and Boston Red Sox.

The response surprised even MLB, which was among the first brands to appear in the iOS Passbook, which launched with the new iOS 6 on Sept. 16. “It clearly suggests how ready fans are for this type of digital ticketing,” says Matthew Gould, VP corporate communications, MLB.com.

The Passbook connection was made possible through MLB-owned Tickets.com, which sells seating for more than a dozen major league teams and has seen digital delivery generally escalate in the last year. Buyers have a range of digital options, from at-home ticket printouts to kiosk delivery as well as other forms of mobile delivery to scannable codes. Gould says that the adoption curve for e-ticketing has been extreme. “Of all the tickets we sold online this year, 75% chose some form of digital delivery methods, up from 45% last year,” he says.

But what surprised MLB about the use of Passbook was the scale at which people used it even though the window of opportunity involved just four teams, over the last two weeks of the season and with purchasers who owned iPhones. The use of the Passbook option far surpassed consumer use of previous mobile delivery choices. “We had not seen this level of adoption with previous mobile efforts,” Gould says.

The appearance of Passbook in iOS 6 clearly has piqued user interest. Walgreens, which also made its app Passbook-compatible, saw incredible acceleration in downloads off of its alignment with the new Apple wallet. Our app rocketed from a rank of 70 to a top-ten free app,” says Walgreens’ head of digital marketing and emerging media Rich Lesperance.

The importance of Passbook in the mobile market may be the way that it helps both surface and aggregate mobile functionality that a number of apps have already included. The Passbook is by default an app on the first page of most users’ iOS deck. But more to the point, it may accelerate user comfort with and adoption of mobile m-commerce activities such as ticketing, loyalty card use, and couponing.