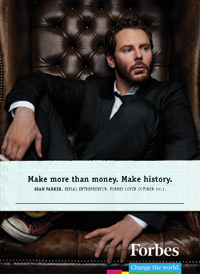 Forbes is launching a new brand advertising campaign this month -- its first in five years.

The print and online campaign will feature mini-profiles of entrepreneurs recently featured on Forbes covers who “exemplify what it takes to be truly successful today.” The campaign also introduces a new positioning tagline for the 95-year-old publication -- “Change The World” -- that will appear across Forbes’ print and digital properties. Previously the company’s motto was “The Capitalist Tool.”

According to Kantar Media, Forbes Inc. spent close to $3 million on ads in 2011. But the company declined to say how much it was spending on the new campaign.

Forbes’ New York-based ad shop Gyro created the campaign and is placing the media for it. The print ads will begin appearing this month in New York magazine. Later this year, the campaign will run in Newsweek, The New York Observer, The Week, Automobile, Motor Trend, The Financial Times and the International Herald Tribune. “Change the World” messaging will also appear across Forbes digital properties, including Forbes.com.

Jack Laschever, chief marketing officer, Forbes Media, stated: “This campaign celebrates entrepreneurs who are driven by the desire for their endeavors to have a positive impact on the world and on generations to come.”

Kathy Ireland, who parlayed a modeling career into a clothing and retail empire, is also featured in an ad that reads: “Kathy Ireland, Supermogul, Forbes Cover, February 2012.” Ads for the campaign featuring other business entrepreneurs will be unveiled in the future. “This is the beginning of a long-term positioning,” a rep said.

“The campaign reflects our changing attitudes toward capitalism,” said Keith Loell, executive creative director, gyro New York, who led the work. “Forbes has a history of recognizing and celebrating trailblazers in business. The new campaign brings this to the forefront.”