The Most Important Presidential Campaign Spot You Will Never See

Audio: “President Obama promised to begin to slow the rise of the oceans. (Laughter) And to heal the planet. My promise is to help you and your family.” (Applause)

Audio: (V.O.) “Mitt Romney thinks climate change is a joke, and rising oceans are something to laugh at. Vote Obama…”

Audio:  “… or learn to swim.” Sound of hurricane-force winds.

Knowing full well that this intro will invoke the wrath of Romney supporters, let me say now that Red, White & Blog would like to offer equal time to anyone who would like to imagine correspondingly fictional versions of Romney/Ryan spots, and we promise to publish them here (or just add them to the comments field at the bottom of this post).

I’ve tried -- I mean, really tried -- to remain neutral, non-partisan and avoid editorializing in the weeks since we revived this political media blog, but the events of this week have hit home in the most literal meanings of that phrase. I’m not going to turn this column into a debate over climate change per se, but of the incredible, indelible timing of Hurricane Sandy, and the effect it will have on the political media discourse.

Hey, don’t ask me. Listen to what New York Mayor Michael Bloomberg said when, after remaining sidelined on the presidential race, he suddenly threw his endorsement to Obama -- largely on the basis of which candidate is more capable of dealing with the consequences of climate change.

“Our climate is changing,” Bloomberg asserts in an editorial published by Bloomberg News, which goes on to endorse Obama largely because of his and Romney’s positions on climate change: “One sees climate change as an urgent problem that threatens our planet; one does not. I want our president to place scientific evidence and risk management above electoral politics.”

I  have no idea how many American voters will agree with Bloomberg -- or me -- that climate change is one of the biggest issues at stake in the presidential race, and that it’s not one to be made light of, not taken seriously, or put on the back burner until the day after tomorrow. But I do know that it is one of the most emotionally vexing of all the issues, although it has barely been referenced in the campaign to date, except for throwaway lines, and now Bloomberg’s endorsement. It’s vexing because modern humans simply are not wired to connect emotionally with a threat that manifests over long periods of time. The way our brains and nervous systems evolved, we are better suited dealing with imminent threats, but if you read Bloomberg’s editorial, he makes a pretty good case that climate change isn’t something happening remotely in the arctic, or off in the distant future. It’s happening here and now. And while we don’t know all the reasons for it, to ignore or to deny it is simply not a policy I want to support.

How many other Americans feel that way will determine, in part, the outcome of this election. My feeling is that given the timing of Hurricane Sandy, the way it played out in the ground zero of the media industry may have a tangible effect -- because of all the research I’ve seen tossed around this election cycle, the ones I’ve found most telling are the ones that tackle deep-rooted emotions and anxieties. Yes, we’re all anxious about the economy, geopolitical unrest, personal rights, etc., but when you strip all of it away, it comes down to who people believe will be a better leader -- who will keep us safe, out of harm’s way, and ensure that we have secure futures.

The research I’m talking about usually poses a question asking voters who they would prefer to have as captain of a ship in a storm, or as commander in chief during an alien invasion of our planet. And I think you know who wins on that basis. So the question really is how much of an influence Sandy has on making voters feel like they’re lost at sea or that the very planet is in peril. 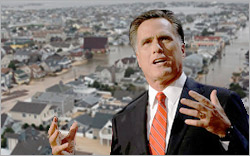 extrablog, politics
13 comments about "The Most Important Presidential Campaign Spot You Will Never See".
Check to receive email when comments are posted.
Read more comments >
Next story loading