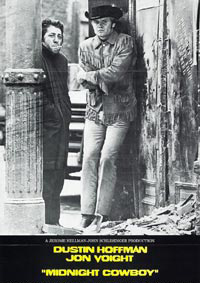 Anyone out there remember the “M” rating that was part of the original small set of film content ratings in the 1960s? If you were a boy like me at the time, that mark may just as well have been a woman’s cleavage. In any newspaper ad, the encircled M promised the innocent something titillating, to be sure. That must be a movie really worth seeing, we thought. R-rated flicks, we knew, were far outside our bounds. But M seemed attainable and somehow both exciting and serious.

And for the film industry, itself unsure of what was and was not allowable in an era of malleable standards, the ratings system actually allowed more daring fare to be made and shown. Arguably, the brilliant "Midnight Cowboy," which was the only Best Film Oscar winner to bear an X rating, couldn’t have been imagined in theaters without a ratings system that cordoned off a place for high-minded but brutal, explicit artistry.

Such is the weird effect a content ratings system can have. Industries like film TV and games put them in place usually to protect themselves from institutional regulation and as a nod to parental control. But they also have a lot of unintended effects -- not the least of which is that it can let a media form grow up.

The same cycle of ratings arguments may well be upon us as smartphones and their apps become prevalent among teens and kids. The polling site SodaHead recently queried over 1100 people on their receptiveness to a parental ratings system for apps, and 90% of parents said they would like to see one. Surprisingly, a majority (58%) of teens were also in favor of such a system. Parents and teens were predictably more divided on whether app downloading should be restricted altogether from minors under the age of 15. While 71% of parents like that idea, only 25% of 13- to-17-year-olds agreed.

It is an interesting tool to contemplate, although its implementation in a universe of nearly a billion different apps would be unwieldy. App developers already self-rate their apps in the Android app ecosystem, and users can flag mis-rated apps for Android managers to adjust. Apple, of course, has a ton of restrictions that it can apply against app content, and its rejections are legion. Any third-party rating system like that of the MPAA or gaming industry would be unmanageable. The CTIA proposed a voluntary ratings systems for app stores late last year, but no one seemed to notice.

But a universal and clearly used app rating system need not be censorious. It can be permissive, in a sense, by highlighting the seriousness of a design and helping both developers and consumers conceive of apps as increasingly complex and adult forms of media. After all, apps really started as nothing more than widgets.

Imagining a next level may require something to help get us beyond childhood. I think an app like The Numberlys from Moonbot Studios is a great example of apps using the frame and interactivity of touchscreens to unique aesthetic effect. But it is still Seuss-like in being anchored to a children’s lit form. On iTunes, the recommendation engine shows that the people who bought this interactive storybook also bought Lion King and Charlie Brown apps.

Don’t get me wrong. I am totally in the tank for Simba and Linus. They are my buds. But like early animation and comics, new visually rich media tend to focus on childlike perspectives and struggle toward adulthood.

Perhaps it is time to start pressing from a number of different directions at once for apps to lurch toward the next level, and reach for that M rating?