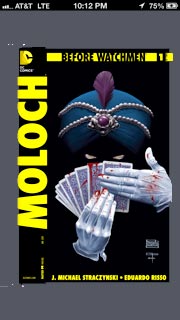 Kudos to DC, home of Superman, Batman, Swamp Thing, and more recently the daring reboot of its entire superhero line of comics in an attempt to make the genre accessible to newbies. The company has also been very aggressive in moving to digital formats and distribution. Last year, when Amazon introduced the first Kindle, DC signed a deal to put about 100 of its key graphic novels exclusively on the new device for a limited period. This was enough to spark Barnes & Noble’s ire and retaliation by removing those graphic novels from their stores for a time.

That is all Kryptonite long under the bridge now, however. Now DC is moving beyond selling only the larger graphic novels across platforms, but this week introduced single-issue digital distribution through Apple’s iBooks, Kindle and Barnes & Noble Nooks. The publisher had been selling digital editions of its comics via the Comixology app and its own branded app on the same day and date as hard copies. Now the distribution becomes wider, and arguably outside the geekdom of dedicated comics apps.

DC told VentureBeat that sales of digital comics have risen almost 200% since this time last year. In my own discussion with executives at the comics companies and at third-party app distributors, they all argue that digital is not cannibalizing print at all -- or not yet. In fact his has been one of the strongest years for the comic book industry in a while. DC’s radical reboot of its superhero books seems to have worked. And devices like the smartphone and tablets have given digital editions the platform they deserve -- richly colored, vibrantly lit, and enlarged in ways that highlight the artistry even greater than print.

Digital editions of comics have an interesting pricing strategy that invites discovery. In their first weeks of release, new comics titles usually are selling for the standard cover price of $2.99 to $3.99. But within a month these same issues often are reduced to 99 cents, making them ripe for impulse buys.

This is a fascinating segment for all media types to watch when it comes to merchandising content on mobile devices. The apps from Comixology and iVerse in particular do a great job of programming sales and parsing new releases throughout the week, not just the traditional “new comics Wednesday.” Unlike even the relatively static iTunes App Store and Google Play, these guys program the storefront in one- and two-day cycles to give regular users a reason to come back daily. Clever hooks with current affairs or upcoming comics-related films, maintain relevance.

In many ways they put the lie to Apple, Barnes & Noble  and Google’s “Newsstand” paradigm for digitized print. These apps look and feel like nothing of the sort, and instead see the marketplace as a place where marketers push, not where readers passively browse.