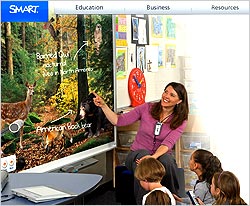 Smart Technologies has appointed ad agency Gyro to create the company’s first global brand campaign, the client has confirmed. The appointment came after a competitive pitch. The client declined to identify other contenders.

The campaign is expected to kick off in the first quarter of 2013, according to a rep for the agency.

Calgary, Canada-based Smart Technologies is a leading supplier of interactive whiteboard displays and related products and has focused its marketing effort to date on the education sector.

Now, with the new campaign to support it, the company intends to broaden its global footprint in the education market, while simultaneously expanding efforts in the general business market as well. The company also has a number of government contracts.

According to Jeff Lowe, Smart’s new vice president of marketing, the brand campaign will center on the idea that Smart Technologies inspires collaboration and meaningful individual participation.

According to the company, research indicates that most employees -- about two-thirds -- are not fully engaged with the work they do. “This level of neutrality results in a lack of motivation, and in turn productivity,” Lowe said. The campaign will convey the message that “Smart Technologies solutions are inspiring collaboration across the classroom and in the workplace.”

The account will be handled out of Gyro’s San Francisco office. Steffan Postaer, executive creative director, Gyro San Francisco said that Smart’s technology “is advanced but the idea is so simple: With Smart everyone can contribute to something greater."

The budget for the campaign was not disclosed. Last year the client generated approximately $740 million in revenue.  In the U.S., Smart spent $275,000 on ads in 2011, according to Kantar Media.  A global ad spending estimate for the company was not available.