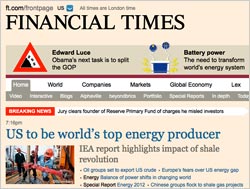 The rapid rise of mobile devices, including smartphones and tablets, has triggered sweeping changes in media consumption habits. No medium is more affected than newspapers, which are transitioning to digital products. One global newspaper, The Financial Times, predicts that most of its readership will access the newspaper via mobile devices before long.

In an interview with Media Week (UK), FT.com managing director Rob Grimshaw said he believes “mobile will be the lead channel for delivery within three to four years” -- if not sooner, given the rapid pace of change. He noted that mobile currently contributes 25% of FT.com’s total traffic and around 20% of all new subscriptions, including print and digital.

Grimshaw added that “the switch to mobile is bigger in magnitude than the switch from print to desktop, in terms of what it means for the way people consume content, and it’s happening faster.”

The mobile channel’s high growth rate is especially noteworthy considering FT’s decision to withdraw from Apple’s iTunes store in 2011, which gave up a major sales platform. Since then, some 3.3 million users have downloaded FT’s HTML5 app. Overall, the newspaper’s digital properties -- including mobile -- have attracted 313,000 subscribers, compared to around 290,000 print subscribers. The digital subscriber base is up 26% compared to a year ago, while the print subscriber base is down 450,000 from a decade before.

As noted, the potential market for mobile newspaper and magazine subscriptions is growing by leaps and bounds. According to Gartner, the total number of “smart” mobile devices in operation around the world will hit 821 million by the end of 2012, and increase to 1.2 billion in 2013; that’s roughly one smart device for every six people on the planet.