It was a year of amazing work, and unsurpassed video consumption, with consumers snacking on video via phone, tablet and laptop. Not all are stellar. Here are 10 the universe should spit out.

You'd think that brand mavens and marketers would have realized by now that every piece of content is, or will soon be, viral. With the exception of those who have taken a monastic vow to avoid all online video, most of us are seeing as many brand videos and ads online as we are off.

There are exceptions — those ubiquitous holiday-time auto ads remain more or less native to the tv set — but beyond that, it's all viral, all the time. As a result, brands risk self-inflicting deep wounds if they fail to understand how their content moves through the world.

Fortunately for me — I write MediaPost's twice-weekly Video Critique newsletter, which is everything its name suggests and yet so, so, so much more — most brands continue to drop mockable video turds on our e-doorstep with abandon. Here, then, in no particular order, are my picks for the ten dopiest, dumbest, least coherent and/or most wackadoodle brand and marketing videos of 2012.

Lord knows there wasn't any shortage of candidates.

The ads for the ProGlide styler, Gillette’s up-market electro-shaving doohickey, feature actors Adrien Brody and Gael Garcia Bernal wandering about in some vaguely hipster-urban setting. There, they convene with musician/actor/hyphenate André “André 3000” Benjamin and do their part to raise awareness of… I guess one would call it “matters relating to precision-honed facial hair.”

For the Web, however, Gillette loosed each of the three to weigh in on matters relating to personal style. Actor/entertainer types working without a script? Bad idea.

Brody’s is the most shallow of the monologues, which is no small feat. Answering questions nobody asked (“What does authenticity mean to you?”), he responds with true him-bo vigor, in the process restoring stereotypes about entertainer intelligence erased years ago by cerebral thinkers like Burt Reynolds and Charo. According to Brody, authenticity “really refers to being sincere and honest with yourself… not necessarily being swayed by everyone’s opinion.” In other words, authenticity refers to the state and/or act of being authentic. Who needs a thesaurus when you’ve got a thespian? 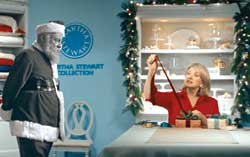 Macy's
Actual: "Another Miracle on 34th Street"
Should-be: "Another Bastardization of a Cinematic Touchstone"

You can't blame Macy's for latching itself, barnacle-style, onto Miracle on 34th Street every holiday season. After all these years, the movie remains blithe and as uplifting as a neoprene sports bra, the single most effective retail product placement (unpaid, I presume) in the history of celluloid. Macy's has coasted on its tails for years.

But using the megamagic of supertechnology to turbosplice clips from the flick into a modern-day setting, then cyberramming its Kringle into pithy conversations with overexposed celebrities (Justin Bieber, Martha Stewart and Taylor Swift, among others), is precisely the wrong way to extend its legacy. Also, the clip officially hit the Web in October, a few weeks before one of its not-as-self-aware-as-he-thinks stars, Donald Trump, officially became odious to a significant slice of the population. Lesson learned: four weeks is a long time in the everything-is-somehow-viral era.

Meanwhile, at the clip's denouement, Carlos Santana shows up with a guitar. He does not appear to know where he is or what he's doing there. Somebody should lead him to shelter and fetch him a warm bowl of soup.

Visa
Actual: "Join Our Global Cheer"
Should-be: "Scenes of People Cheering, Accompanied by Narration About How People Like to Cheer and How Cheering Through Social Media Is Like Octuple-Cheering"

Visa's "Global Cheer" Olympics campaign starts with a flawed premise — that enjoyment of the Summer Olympic games will be amplified by simultaneous enjoyment of the social media swirling over, under and around it — and sinks from there. It may have gravitas, courtesy of Morgan Freeman's ever-solemn narration, but the clips designed to familiarize with already familiar athletes (Michael Phelps) reek of desperation, à la "we hitched our wagon to these guys/gals. If we're going down, you're coming with us."

The "Join Our Global Cheer" spot may or may not have been an official Visa production, but its gauzy PR-speak about "harnessing the Olympic spirit into a global movement" makes it feel lighter than air. It takes a full 90 seconds to convey a simple concept that I can get across in eight seconds — hell, time me. "Please go to our Facebook page, please, and create content, so that we don't have to." Meanwhile, to hear the campaign tell it, remotely cyber-cheering for Malaysian track cyclist/dreamy dreamboat Azizul Awang is the next best thing to serving as Best Man at his wedding. Good to know. 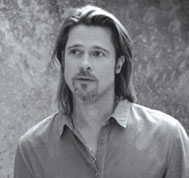 In his viral-bait spots for Chanel No. 5, Brad Pitt gazes vacantly towards the camera and talks. He talks about journeys and dreams. He talks about fortune and inevitability. Then the camera pulls back and we learn that we're supposed to be buying/feeling good about… perfume? Really? Smart money was on an exotic vacation locale or some kind of celebrity quasi-religion. Perfume. Huh.

The problem with "There You Are" isn't Chanel's approach; the brand has long trafficked in the kind of mumbo jumbo that, according to no focus groups, enhances its allure and mystique. The problem is that by choosing Brad Pitt as its first-ever spokesdude, Chanel calls attention to itself in a way that can't be ignored. But Pitt's presence ensures that we'll all pay attention — in this case, not a desired outcome.

Facebook
Actual: "The Things That Connect Us"
Should-be: "Chairs Are People, Too!"

I don't think anybody had any idea what to expect from Facebook's first-ever superclip, envisioned as yet another front in the Grand Exalted Social-Media Overlord's battle to humanize itself. It could have featured an all-oboe orchestra or animated stop-motion chipmunks or children holding hands and dancing and going la la la. It could have featured Bono talking about technology infrastructure in Africa. Nothing would have surprised me.

And then I heard the following phrase, which prompted me to scroll back to the start of the clip and make sure I'd heard it correctly: "Chairs are for people — and that is why chairs are like Facebook." Apparently the thing that connects us, as much as technology or transportation or yenta relatives, is chairs. Recliners, thrones, fauteuils, beanbags, you name it — only through, on, across or alongside chairs can we find common emotional ground. But, the video adds, dance floors and doorbells are a little like chairs, and thus Facebook, because they too have connective properties.

I hate my job.

Cartier
Actual: "Painted Love"
Should-be: "Tortured Bearded Artist Guy Falls In Love With Girl In His Painting, Who Comes To Life In an Animated-Sprite Kind of Way; and Then, In the World's Most Transparent 'Muse" Metaphor, He Chases Her/It Around Town and, Finally, Back Home, Where-upon He Is Pulled Into the Painting and Goes Smoochy-Swimming With
the Animated-Sprite Painting Girl"

It's a brand video, people. It's not Fellini Satyricon. 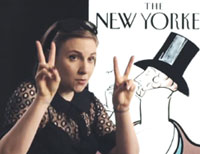 For the most part, brand videos go the big-tent route: all comers are welcome, so long as you've got cash to spend or an itchy "like" trigger finger on Facebook. But Dunham's efforts on behalf of the New Yorker iPhone app, in which she jousts with uninterested talk-show host Jon Hamm and debuts a clip from her "new movie" (which features more straightforward discussion of the New Yorker app than does, say, Transformers: Revenge of the Fallen), seems designed to alienate, annoy or otherwise baffle a huge chunk of its potential audience.

It's a strategy that makes no sense in the real world, but even less sense on the everyone-everywhere-everything web. Yes, we get that the clip is a meta-commentary on the type of clips usually employed to introduce such products. But do we really need to bury the wit beneath a heap of smirks and air quotes? Would an easy, airy punchline do profound danger to the brand? Lighten up, missy.

Separately, has anyone told Jon Hamm that he's allowed to say no every so often? 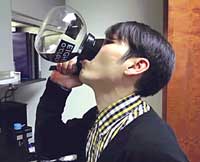 I believe in kindness, charity and decency towards my fellow man and woman, especially those in need. That's why I refuse to say anything critical about Eight O'Clock Coffee's attempt to join the 21st century via one of those "Internet videos" its musty brand people had been hearing so much about.

I won't rip the one-note bit drawn out over five minutes (competitive eater visits coffee brand's "cupping room" and — get this — starts drinking all the coffee and eating all the coffee beans!) I won't scold the creators for failing to arm the actors with a script or anything beyond minimalist props. I won't mock the lighting director for keeping his charges in the shadows, literally.

I won't go there. That's not how I roll. 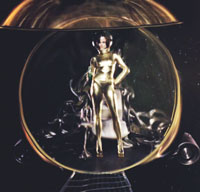 Whenever a brand manager proclaims, "I want something… cinematic! Yes, cinematic!," unintentional hilarity is soon to follow. And so it goes with Perrier's "The Drop," a high-concept nugget o' brand goodness in which Perrier's refreshervescenceness saves the world.

How, you ask? Well, see, there's this supersonic heat wave that's totally melting everybody's wax. So the Powers That Be combat it the only way they know how: By belting a supermodel cosmonaut into a pod and launching her into space, with a Perrier as her only cargo. The idea is that she'll bend the laws of chemistry and not burst into flames upon reaching her destination, then destroy the sun by pouring Perrier on it.

But wait — she's thirsty! And so, as the sweaty denizens of Planet Earth watch aghast (via webcam? This part isn't entirely clear), she chugs the entire bottle. Fortunately for everyone's sake, the model is a drooler, and a single drop of Perrier tumbles off her oh-so-pert lower lip and extinguishes the threat. The end.

Now, what was it that I was supposed to buy, and what are its brand attributes?

H&M/Anna Dello Russo
Actual: "Fashion Shower"
Should-be: "Campy Fashion Lady Makes Me Fear For My Safety and the Safety of Those I Love"

The clips I watch as part of my "Video Critique" duties sometimes delight me. More often, they bemuse or sadden me. But only once did a clip outright terrify me — and that once was when I screened H&M's "Fashion Shower," starring designer Anna Dello Russo as a fashion guru-cum-provocateur-cum-overcaffeinated loon.

In it, she announces that the viewer needs a fashion shower, which is less about hygiene than it is about the donning of/cavorting with accessories like oversized novelty scissors. As she prances, she ticks off her list of fashion lessons, among them that "wearing night clothes in the daytime is unexpected."

I happen to agree, but that's not the point. There are many, many reasons to create a viral-minded clip, among them awareness and brand definition and blah blah. But something this over the top only appeals to true believers. If that happened to be Dello Russo's only goal, mission accomplished. Really, all she did here was affirm her nutjob bona fides. She could've done that without blowing thousands of dollars on that mountain of a straddleable gold shoe.