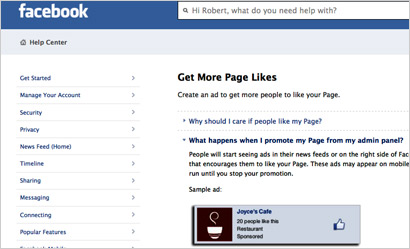 As part of its effort to cultivate small and medium-sized businesses, Facebook has introduced a new option that allows page owners on the site to more easily create ads to build their fan bases.

Specifically, the new offering enables companies to create "PageLike" ads directly from their Facebook page rather than through the more complex Facebook ad system. In that way, they are similar to Promoted Posts, but instead of being used to reach existing fans, the Page Like ads are intended to attract new ones.

Facebook said Thursday it took the step to simplify the process of running Page Like ads in response to small businesses and new page owners telling the company that driving new customers to their Facebook presence and growing their fan base are among the biggest challenges they face.

Speaking at the BIA/Kelsey interactive conference last week, Dan Levy, Facebook’s lead for small business, said the company would look into supporting third-party companies providing services for small businesses on Facebook beyond those in its preferred marketing developer program.

Overall, Facebook supports more than 13 million small and local business pages, with active pages up 40% this year. The number of local businesses on Facebook that bought advertising on the site has nearly doubled. Facebook COO Sheryl Sandberg called small businesses the “holy grail” of online advertising in October, suggesting the social network was well positioned to capture more of that spending.

That’s due to Facebook’s local targeting capability. When it comes to running Page Like ads, companies can use their page administrator panel to set basic locating targeting by city, state or country. The budget size depends on how many people an advertiser wants to reach, with a minimum spend of $5.