How An Online Video Created A Best-Selling Book--in Cleveland 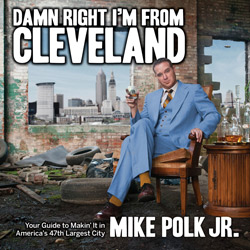 A lot of comedians are making money from online videos—Louie CK comes to mind.

But not many of the comics making money online are in Cleveland, or are mainly known for making comedy for the Cleveland crowd.  As you may have heard, however, there are a lot of jokes about Cleveland, so the material is there.

Now, in large part because of YouTube, the book, Damn Right I’m From Cleveland: Your Guide to Making It in America’s 47th Largest City has become a local best seller. Gray & Co., the publisher, is rushing to print more-- and because so many people have moved from Cleveland, Gray is selling copies all over the world to ex-pats. It says it has shipped copies to five continents.

Author Mike Polk Jr. has a hit like that because he’s built a following making videos, alone and with a comedy sketch group, for years, for and about Cleveland. Back in pre-YouTube days, Polk sent videos to places like iFilm and paid them to put it online. “It’s insane to think about that,” he says now. There have been about 50 million views of Polk videos. That's why the book publisher came to him.

“The book’s selling point is that it’s a great thoughtless gift,” he says “If you have somebody you don’t care much about but you have to get them a gift, this book is the perfect thing.”

His style is nothing if not self-deprecating, and that’s good because his monetary success isn’t worth enough to go to his head..

His YouTube videos haven’t made him wealthy, at all. But “it’s put me in the position where I am going to make me some money. It’s not retirement helpful, by any means, but it’s pretty much carried me through.”

Cleveland, let’s make clear is a much maligned city. (Also. let’s ‘fess up. I was born and raised in Cleveland, and as Polk says, for people from there, it’s like Cleveland is their little brother. I can make fun of it, but you’d better not.)

It is a much, much better place than the pro teams that represent it in football, baseball and basketball. But those teams are comic fodder and part of the city‘s burdensome image.

Polk is probably most famous for a screed he recorded outside Cleveland Browns Stadium last year after yet another humiliating loss. He railed at the team’s remarkable, statistically baffling ineptitude since they returned to Cleveland in 1999.

“You’re a Factory of Sadness!” Polk screamed at the stadium itself. “Factory of Sadness” is now on thousands of t-shirts in Cleveland—that’s what the eight million YouTube views of that video will get you.

Polk also caused a ruckus when he recorded two versions of his “Hastily Made Cleveland Tourism Video” in 2009—with a combined 10 million views. Its quick cut video of urban blight & blah made it cruelly funny. The grim neighborhood scenes were accompanied by a non-rhyming upbeat lyrics including, “Buy a house for the price of  a VCR/Our main export is crippling depression.” Enticing!

Cleveland’s real tourism board was livid and organized a real, hastily organized tourism video campaign to get residents to record for YouTube consumption a kinder vision of the city.

The new book is a pastiche of weird advice and observation, stuff about how to act on the bus, proposals for a new city flag, and observations about the quality of gentlemen’s clubs in town.

On stage and in video, Polk’s dry, droll, ironic, somewhat juvenile and prone to obscenity, but in a real nice way.  If you’ve ever heard Martin Mull (another Clevelander, by the way), you might see a comparison.

He’s also using YouTube to sell the book, which Gray proposed to him after they saw those YouTube figures. In one recent posting he promised to help viewers through often-asked questions, which got down to just one: “Where Can I Get the Book?”

“That’s really a great question, and not at all lazy,” Polk replies on the video. “Why don’t I just Google that for you since you apparently haven’t heard of the world’s most popular search engine?”

Surprising to me, David Gray, who started Gray & Co. some 20 years ago, says that while there are lots of publishers who deal in the area of regional books, there aren’t many like Gray, which is a regional publisher than only publishes book about one specific region.  He doubts that YouTube and online videos, except for natural video talents like Polk, can create a new market for publishers, citing the thud that online book trailers made when the industry tried that several years ago. But I think he just might be wrong. If the social media biz is going local, then probably there should be entrepreneurs interested in making local online video talent into stars. It's working for Mike Polk Jr.

You can respond to VidBlog below. To send info, email pjbednarski@comcast.net