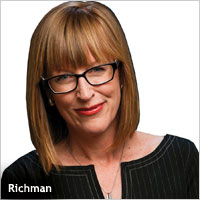 Amanda Richman has been named president of investment and activation at Publicis Groupe’s Starcom, part of the Starcom MediaVest Group, effective with the New Year. She replaces Mike Rosen, who is headed to a senior post at Telemundo.

In her new role, Richman will be responsible for the agency’s activation and investment, spanning all traditional and digital media. The shop places about $9 billion worth of ads annually for clients, which include Bank of America, General Motors, Kellogg’s and Mars/Wrigley.

Richman will also serve on Starcom’s executive management board and will report to Starcom CEO Lisa Donohue.

“In a marketplace driven by today’s digital consumer, Amanda’s appointment signals the next evolution of Starcom’s investment group,” stated Donohue. She added that Richman “has a well-earned reputation for motivating clients and partners to embrace innovation and invest in new marketing channels and approaches.”

Over the past year, as president of digital for Starcom sibling agency MediaVest, Richman helped lead a digital restructuring that integrated its digital capabilities across the entire agency. Commenting on her elevation, MediaVest CEO Brian Terkelsen stated: "We are confident that Amanda will do well and are thrilled that she will continue on in the SMG family.”

As the president of digital at MediaVest, Richman oversaw the shop’s digital offering, team and investment for clients including Coca-Cola, Comcast, Procter & Gamble and Walmart. In addition to that role, she also served as Starcom MediaVest Group’s digital lead for Emerging Markets.

Previously, Richman was MediaVest’s executive vice president, managing director of digital. Earlier, she was senior vice president, director of strategy and innovation for MediaVest’s P&G account. In that role, she led the development of digital strategy, innovation, and portfolio management for more than 100 P&G brands. She was inducted as an OMMA magazine "All Star" in 2009.

Earlier she held posts at two Interpublic Group agencies as well as at Time Warner.