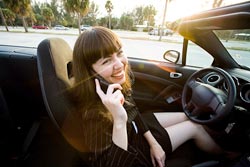 A lot of studies have come out in recent weeks predicting how various product categories will do this year. Robert Shullman, who left Ipsos/Mendelsohn to start his own firm, Shullman Research Center, has a new report -- its first -- that takes a demographic approach: where will well-to-do consumers sit for 2013?

The survey-based study, based on a poll of affluents against a group representing all Americans, found that 14% of those making $500,000 or more (1% of the population) plan to spend more if the economy keeps improving, versus 5% of the general population and 4% of those making over $75,000.

Generally, the majority -- especially the luxury and affluent consumers -- believe they definitely or most likely will be better off financially 12 months from now. And if the economy continues to improve, the vast majority envision spending more or about the same during the next 12 months.

The study says over the next year, more affluent consumers than the entire population will buy or lease a new vehicle. A quarter of those making $250,000 or more said they will do so, with about 14% now in market. The brands aren't just luxury marques. The study said the most-considered brands are BMW, Acura, Mercedes, Cadillac, Nissan and Ford.

In tech toys, 62% of the mid-range group of affluent consumers (those making $250,000 or more) plan to buy electronic/digital devices like tablets, smartphones, e-readers, TVs, and Blu-ray players.

Affluents' advertising recall based on medium aligns more or less with everyone else's with most notable variations among the very affluent: television brings the best ad recall numbers for all demographics, followed by the Web. The one percenters, however, are really different. Magazine ads stick in their minds more than ads in any other medium. TV is next, tied with radio. Also effective are direct mail, and newspapers. Web ads are just ahead of billboards for the very wealthy.

The ranking of devices by how indispensable they are is consistent among income groups: touchscreen smartphone first, followed by flat-panel TV, then tablet and then a second smartphone.

While not focused on specific luxury brands, a cohort of just about every demographic group plan to buy luxury products and services in 2013, notes the study. And no surprise -- that's especially the case among affluent consumers. But while lower margins of the affluent demographic such as those who make $75,000 to $150,000 -- who comprise 28% of all groups -- align more with the total, those affluents making much more are also much more inclined to buy luxury products.

The study notes that since affluents haven't chosen brands yet, there are a lot of opportunities for high-end brands to grab share among affluents.