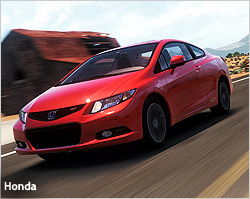 Honda is putting three of its cars -- at least the virtual versions -- in the racing game "Forza Horizon," which is free to Xbox Live members. The integration also involves two contests.

In addition to downloading Honda cars to play in-game, the program allows players to race virtually against Honda IndyCar driver Scott Dixon and try to beat his fastest time in a 2013 Civic Si. This “2013 Civic Si Challenge” contest awards the fastest racer the opportunity to meet the Indianapolis 500 winner in person and receive a custom Civic Si-themed Xbox 360 gaming console.

Nick Lee, manager of Honda national advertising, tells Marketing Daily that this is not the first time the automaker has been in the game, whose fifth generation launched in October. "Honda vehicles have been included in previous versions of the game," he says, "but this is the first time Honda has partnered with Microsoft to offer free downloadable car packs to users in addition to the Branded Destination Experience."

The whole thing ramped up last month with video banner ads that directed Xbox LIVE players to the race. Players could then view photos of Honda cars and vote on the track to compete in the “2013 Civic Si Challenge.”

Another element is an in-game photo challenge starting on Feb. 15 where players can submit photos taken in-game of the 2013 Civic Si in the Forza Horizon environment. The best photo will be featured on Honda social channels and on the Honda Web site. Winners of the contest will receive a custom Civic Si-themed Xbox 360 gaming console.

Lee says that research shows that Civic buyers and intenders over-index for playing video games. "The intention of the Branded Destination Experience and the support we are giving it is to extend awareness of the Civic Si into gaming environment in a way that would be native to Xbox gamers," he says. "We aligned with the very popular Forza Horizon game in a way that would enhance a gamer’s experience."