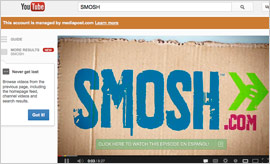 What's the secret to connecting with young Web audiences, and then strengthening that bond over time? Smosh and parent company Alloy Digital might have a good idea.

Since its debut on YouTube in 2005, the wacky sketch-comedy brand has racked up more than 2 billion views, and 6.8 million subscribers -- more than any other channel on YouTube, according to new data from channel tracker VidStatsX.

Alloy -- a youth-focused media company and video network -- is obviously happy with the success of Smosh, which it acquired in 2011 for an undisclosed sum. Unfortunately for Alloy, however, the Smosh comedy duo of Anthony Padilla and Ian Hecox is a rare breed.

"I don't think anybody compares to Smosh," said Barry Blumberg, Alloy Digital EVP and Smosh president. "That bodes well for Smosh, but makes it difficult for us."

Yet Smosh's success is no mystery, according to Blumberg.

Producing and releasing content on a regular schedule is key to pleasing Web audiences, Blumberg noted. That, and “continuing to push the envelope creatively.”

That said, “there are very few that have [Smosh’s] production value,” Blumberg admitted. “They're smart and funny, and continuing to grow.” According to Alloy, Smosh has seen its YouTube views grow nearly 40% since the acquisition in July 2011. Recent brand partners have included Ubisoft, for the launch of its popular video game "Assassin's Creed III;" Nestlé for its Hot Pockets brand of sandwiches; and Electronic Arts for "The Sims 3 Supernatural."

Along with being a source of copyright-clear, brand-safe original content, Smosh has also spawned several spinoff channels and apps.

The Smosh franchise now represents five channels with more than 10 million subscribers, and 2.6 billion lifetime views, according to Alloy. In particular, a Smosh Games channel has already surpassed 1 million subscribers since its debut last September.

Among other efforts, Blumberg said that Alloy has helped Smosh expand its social footprint. All told, the brand now boasts over 5 million followers across multiple social profiles, by Alloy's estimate.

Along with Smosh, Alloy made several strategic acquisitions in 2011, including online entertainment news producer Clevver Media, and Generate, a full-service studio and talent management company.