The Lost Luster Of The Juicy Apple Rumor 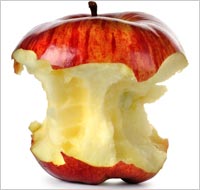 The gadget rumor mill seems to have entered a new stage of apoplexy as Apple appears to be descending from its cloud of mystical status and now occupies the ranks of mortal brands here on Earth. With recent iPhone releases, the cult of the Apple rumor reached a comic climax. When leaked images of battery connectors go viral among thousands of blogs and even major news services within hours, you know that something has to give.

And it has, at long last. Most of the current rumors surrounding the fabled company involve Apple catching up to trends. Valid or not, in the past week we have heard in the press rumors of a 4.8-inch iPhone phablet model to accompany both bargain-priced iPhones as well as multicolored next-gen units. The iPad Mini is going to get the Retina display upgrade it probably should have had out of the gate as the company attempts to dominate a half-sized tablet market it once said it didn’t want to encourage in the first place. And the iPad -- which increasingly looks like a lumbering dinosaur against more portable alternatives -- will go on a diet, according to reports.

Perhaps the most revealing sign that Apple itself knows it has lost its special luster is the fact that it likely will engage shorter product cycles for its iconic products. The semiannual keynote reveals of well-cloaked new products will likely get diluted by multiple upgrades and launches throughout the year that will be leaked more accurately in advance to the blogosphere.

The game was fun while it lasted. Like the British and their royalty, having Apple as an uber-brand that riveted our respect and attention was just plain good entertainment. Having a clear pacesetter and genuine innovator in the market was also refreshing in an era of focus group-driven development.

And it is not entirely Apple’s fault that the era is over. The mini is a joy to use. Despite its critics, the iPhone 5 is, in my mind, one of the most refined and enjoyable devices I have ever used. They will continue to be market leaders in design. And for all we know, this Apple-made TV or set-top box will help us rethink TV in the end. The post-Jobs era has had its missteps (as did the Jobs era), but I suspect this has more to do with the maturing of the device market. The gadgets are more iterative at this stage, as they should be. In order for a technology to become a medium, we actually want more predictability and stasis on the hardware side. It is not as if Samsung is going to be the next Apple.

But what Apple’s fall from special status may represent is a healthy refocusing of the mobile market away from hardware and toward content, experiences, interactions with other media and moments in peoples’ lives. There are still gadget innovations coming, to be sure. NFC and machine to machine connectivity will be huge, although we already see that coming. Likewise, wearable computing could well reshuffle our devices yet again. But when it comes to the mobile phone, which Apple redefined six years ago, we seem to be settling into a midlife where the focus turns to the participants to and consumers of the platforms -- not their architects.