Next Up, iSkin; Apple Wants To Get Hyper-Personal 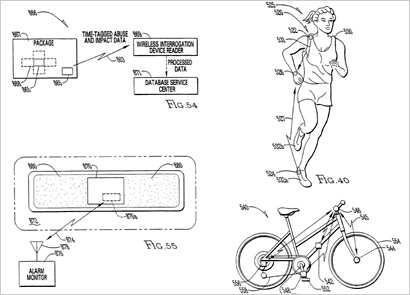 You thought smartphones were as personal as wireless devices get? Just wait. According to new patent filings from Apple (as reported extensively by Apple Insider), the company is looking at ways to connect skin sensors, motion detectors and other measurement tools on the human body to connect to a mobile computing device and new products and services. Yup, the iSkin.

According to the filings, which roll up some previous patent applications as well, Apple is looking into both motion and environmental styles of sensor. By placing multiple body sensors on a subject and tying it to a portable computing device, the system could detect and log complex movements. Some of these systems would allow for the measurement of physical interactions, like the strength of a kick in karate, and could be used to track packages -- for example, to find out why a package arrived with its contents broken -- and in industrial production.

The Movement Monitoring Devices (MMDs) would have internal clocks and transmission systems so each movement could be tagged, logged and communicated on a continuous basis to a device. Event Monitoring Devices or EMDs would measure events where some activity exceeded a threshold, like excessive heart rate or blood pH level.

While some of Apple’s thinking here is aimed at verticals like health, there are clear indications that it has media in mind. The filing speculates that some of these sensors could be used to amplify the experience of athletic events.

For marketers, what really becomes interesting is the prospect of sponsoring some of these personal monitoring or logging functions. Before anyone gets creeped out over the prospect of Apple knowing your blood glucose levels, consider how sensors could give consumers themselves incredible new tools for self-monitoring, behavior control and modification. What marketer wouldn’t want to help underwrite and sponsor someone’s weight loss and physical activity regimen? Imagine how sponsored loyalty and rewards programs could be built into mobile personal sensor-driven apps. “Congratulations, skinny. You just worked off 778 calories on that run. That is equal to two Krispy Kreme donuts. Want a coupon to reward yourself?"

There is a really interesting prospect here of each of us becoming our own big data piles. Fitbands and such are only the start. We could cast off so much data about our habits and activities that the consumer could be given cool tools for mining their own action data to reveal patterns, suggest action plans, create personal efficiencies, etc. Just imagine the products and services that could be crafted out of this sort of platform that would help people feel empowered by data, rather than anonymized or controlled by other people's use of it.

apple, health, mobile
1 comment about "Next Up, iSkin; Apple Wants To Get Hyper-Personal".
Check to receive email when comments are posted.
Next story loading