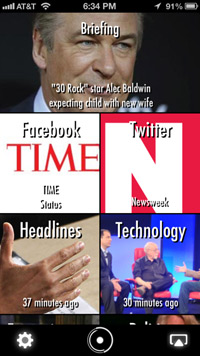 One of the coolest damned experiments I have seen lately in blending social, mobile, news media and multimedia is the Winston app that Reactor Labs launched this week. This is a voice-enabled news assistant that tries (tries, mind you) to summarize your social feeds and topically organized news items into a kind of digest. It is like a narrative Flipboard. Or Siri reading you the news…and Twitter. Or Max Headroom without a touch of wit.

The app can access your Facebook and Twitter feeds as well as accept your topical news picks, “technology,” “Headlines,” etc. Then it uses semantic analysis and multimedia razzle dazzle to create a narration that mimics a real newscast, but personalized. If you tap the Briefing tile, Winston -- in a synthesized voice with a British accent -- tells you the local weather forecast and then begins reading from your feeds.

But the well-designed app does not do a straight read. It often introduces the item by telling you which of your friends posted it. Or it recognizes that the item is a question and so it tells you that so-and-so asks… . When items are heavily shared or commented upon, it alerts you to their popularity.

The app also wisely turns the audio experience into a video one. It pulls relevant photos and uses the Ken Burns span and pan documentary technique. The app also has Airplay support for putting up on larger screens.

The result is absolutely fascinating, if not entirely convincing. The app is at times uncanny in its ability to root out the substance of a news item and present it succinctly. But like all synthesized voices and reading algorithms, Winston’s cadence is off, and he gets into some weird but funny Max Headroom stuttering jags.

For drivers, of course, Winston is a natural idea. But it also reminds us how little smartphone media makes use of the audio channel. There are times when people just don’t want to be neck-bent over their smartphones in what has now become our normal American profile.

More to the point, Winston is a genuinely interesting innovation on media consumption and aggregation. Just as Flipboard sought and found an attractive new way to make news more fun and native to the device, this aims in a similar direction.

It is no Flipboard, but there is that same reach about it. It encourages our thinking about how aggregation, personalization, image and animation, social media and more can be presented in ways we haven’t tried yet. The device’s capabilities and its new contexts should help us reimagine ways of experiencing content.