Real-Time, Even At Half-Time 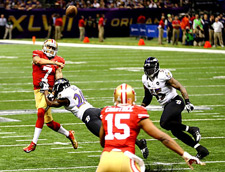 As far as media events go, there probably hasn’t been one more real-time than Super Bowl XLVII, which included a number of media firsts, including the ability of viewers to watch the action of all 22 NFL players on the field at the same time, on a single screen. The technology, which the NFL aptly named the “All 22” camera angle, previously was only available to NFL teams after a game, so they could conduct their own post-game analysis. But thanks to the insistence of Super Bowl network CBS Sports, it was also available to millions of users tuning into the game on CBSSports.com.
“[The NFL only gives] it to coaches after the game to review the footage,” Jason Kint, senior vice president general manager of CBS Interactive’s Sports Division, said Friday during a keynote at the Mobile Insider Summit on Captiva Island, Florida. Kint said CBS Sports pushed to make it available to the general public, because it “was the last game of the year,” and an especially big one at that. And the rest, as they say, is history -- all 22 angles of it.
Kint said the streaming feed of the never-before-public camera angle was among the most popular of several real-time innovations CBS Sports used on Super Sunday. It was so popular, in fact, that professional sports writers were using it to rewind and pause the action, and even grabbing “screen-shots” to annotate their real-time commentary of the Big Game.
It was the public could see the entire field of play for an entire NFL game, and Kint said it proved to be a massive success.
Other real-time innovations including the first ever Super Bowl in which the commercials were simultaneously available online in real-time. In previous years, the Super Bowl spots were only available after the game, and Kint said this feature makes a lot of sense, because people walking in the room after a particularly noteworthy spot often are not able to convince their fellow Super Bowl TV watches to rewind the game in real-time to review it, but they could go online to view it simultaneously while the action continued.
Another real-time first was a new socially-powered “Fan Choice” camera angle that enabled online users to vote which of a variety of sideline, off-TV-screen camera feeds should be featured. Kint said one of the best examples of this angle was during the third quarter of the game, when the San Francisco 49ers seemed to be unraveling, and fans selected a feed for backup quarterback Alex Smith warming up on the sidelines.
“We captured this great moment that you wouldn’t normally see with Alex pacing along the sidelines. And you know what was going on in everyone’s minds -- whether he should be coming into the game,” Kint recalled.
Perhaps the most dramatic real-time moment came at the end of half-time, when a power outage knocked much of the Superdome into darkness and cut the main broadcast TV feed. Kint showed some behind-the-scenes footage of an amazingly calm and collected CBS Sports team reacting, in real-time, as the largest audience ever gathered to watch nothing happening -- since Geraldo Rivera opened Al Capone’s vault in a live, nationally syndicated TV show.
“People kept their cool,” Kint recalled, adding that when the main feed went dark, the second screens lit up with social media interaction (next to Beyonce’s half-time show, the blackout generated  the most tweets), as well as some innovative second-screen programming, including on-the-fly creative executions by Audit, Tide and Oreo.
“They had war rooms set up, and not knowing if that moment [the blackout], would come up,” said Kint, who dubbed the advertising responses, “very interesting.”
All that real-time action added up to the biggest media event ever, according to Kint, and while most of the action was in front of the TV, where 109 million people watched the game, Kint said the online and mobile traffic set new records too.
To enhance it, he said CBS Interactive did everything it could to prevent any impediments to digital connectivity, including dispensing with registration and authentication processes, which is said, “were all just obstacles to the fan.”
“We tried, from the ground up, to make sure that -- from the search term to actually watching the game -- you were only one click away,” he said.
It worked, Kint said, citing a surprising metric. While Super Sunday normally erodes Internet traffic (presumably because people are gathered around their TV sets), Kint said it eroded less this year than in other recent years.
“Last year, Internet traffic dropped 20% on Super Bowl Sunday vs. any other Sunday. And this year, it dropped only 15%,” he noted, adding that he believed at least part of that difference was due to all the action that CBS Sports put on their screens.

>
real-time
1 comment about "Real-Time, Even At Half-Time".
Check to receive email when comments are posted.
Next story loading