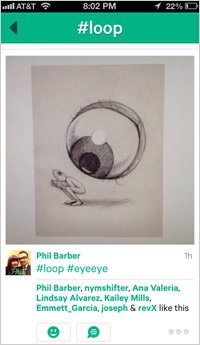 Any media geek older than 45 (we were called "AV guys" then) must recall growing up with a Super 8 film camera in hand and a desire to remake "Star Wars" in his basement. The era that J.J. Abrams and Steven Spielberg honored in their film Super 8 captured the vibe well. The most basic version of professional media making finally had been put in our hands. All it took was a lot of splicing of 2.5-minute reels of celluloid the width of fettuccine, a Kubrick poster on your wall, and home movie lights that bubbled your skin on contact and made all your stars squint like Clint, intentionally or not. It was all about imagination filling in the gaps of low-res, point-and-shoot technology.

Something like that vibe struck me as I fell into an hour immersed in Vine 6-second clips. One of the great things about this Twitter-owned app is the curation, which does not require hashtag searches and other arcana best left to those social network dweebazoids -- who are not nearly as cool as the media geeks, by the way. The editors have their picks, there are good trending tags, and the Explore interface has a grid of fun types of Vine clips: loops, pets, magic, etc.

And as I am reeling through the short reels watching all of these people craft bad, good, dazzling, and even artistically interesting clips, that old Super 8 magic started wafting over me. People are posting a lot of funny stop-action animation of exactly the sort every Super 8 mogul did with their first three reels of Kodak stock. The limitations of the medium inspire creative solutions. Boiling down video production to a simple pause/restart button into a six-second frame seems like a maddening shackle, until you watch amateur directors fill it.

It all gets very meta very fast, too. Just as we Super 8-wielding directors of old were enamored with recreating Kubrick and Hitchcock scenes, there is a tendency for these early Vines to engage other media. We have loads of film quotes, a montage of Lichtenstein pop art paintings that themselves obsess on comic art (meta on meta, oh my!), rapid reads of coffee table books, and more animated action figures than one could imagine.

There is a curious aesthetic here worth watching, however. It involves leveraging the familiar like other media to make a larger meaning quickly, compressing action so impossibly it forces you to reference a larger point to it all, and microcosms of sentiment that radiate when echoed in loops.