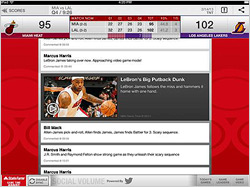 After more than three million Super Bowl fans accessed the big game on tablets and PCs weeks ago, the push is on to leverage that second screen for live sporting events. Next up, TNT’s NBA basketball coverage, which will get a dedicated sponsored iPad app titled “NBA Game Time presented by State Farm.”

The app uses synchronization features to feed real-time stats and commentary to the iPad during live telecasts of all TNT Overtime games through the remainder of the season. Video, scoring and related updates will appear in the app as will considerable State Farm branding.

The sponsor will have branding presence throughout the app, but the audio synch in the app will also pick up cues from State Farm ads running on the TV. Supplementary State Farm content will run on the second screen in concert with the on-air spots.