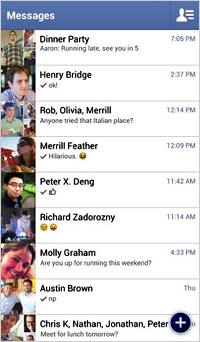 In a move aimed at increasing Facebook’s penetration into emerging markets, the social network announced partnerships with 18 worldwide carriers to underwrite the data fees associated with sending messages within Facebook apps and sites. Announced this morning at its “Notes” blog, the company says it will work with the carriers so that users of the Facebook user-to-user messaging features will have their associated data usage discounted or be free altogether. Facebook has been promoting its internal member-to-member messaging feature of late as an alternative to SMS in much the same way Apple pushes its iMessage function among iOS users.

The partnerships include carriers such as TMN in Portugal, Three in Ireland, SMART in the Philippines, Tre in Italy and STC in Saudi Arabia as well as carriers in Brazil, Egypt, and Indonesia.

Because the Facebook messaging service uses the data channel, it adds to the data allotment that most users incur. By underwriting the feature Facebook is encouraging users in these markets to see its internal messaging platform as a cheaper alternative even to SMS, which also impacts usage totals and charges.

The support will be rolled out in coming months for the Messenger service running on Android, iOS and Facebook for Every Phone.

The development is significant on a number of levels. First, Facebook has been enhancing its Messenger app considerably in recent weeks to support voice messaging and chat and to rival both SMS and several other free app alternatives to SMS. Its potential as a robust voice and text-messaging alternative to both voice and text channels is growing.

Facebook’s move also opens the door for the model of publishers subsidizing data costs associated with the use of their service. As 3G and 4G phones proliferate worldwide, data usage soars and consumers become ever more sensitive to their own data caps and the bandwidth costs of consuming mobile content. Facebook is opening a new front in the competition among major media in using data plan incentives to encourage use of their products. Generally publishers have long fought efforts by access providers like MSOs and wireless carriers to extract fees from content providers that are responsible for much of consumer bandwidth use. In this model, Facebook seems to embrace the model by leveraging it to encourage its service’s use.