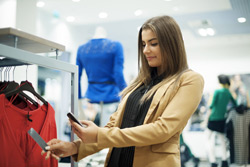 Consumers are using mobile devices in stores to price match, but they’re not showrooming. After comparing prices and reading reviews, the next most popular activities among mobile shoppers are checking for in-store deals (49%) and browsing a brick-and-mortar retailer’s own Web site (36.5%).

Those findings are based on a survey of 1,400 mobile customers by location-based ad network JiWire, as well as from the billions of impressions across its combined Wi-Fi and mobile advertising platform during the fourth quarter of 2012.

JiWire’s report indicated that when it comes to using Wi-Fi-enabled mobile devices in stores, women outpace men in seven of nine activities it tracks, including looking for in-store deals, communicating with friends, finding other product options and social-media posting. Men are more likely to get product reviews and browse a store’s Web site.

Overall, people are almost twice as likely to use mobile devices when shopping in an electronics store (44%) than other locations, with clothing retailers the next most common, at 26%.

JiWire noted that more retailers added in-store during the holiday season as a value-added service, following the pattern of coffee shops, hotels and airports. Some 80% said the availability of Wi-Fi would influence or somewhat influence where they shop.

A separate showrooming study from Ipsos MediaCT and IAB this week showed that while 42% of people using their phones in-store ultimately made a purchase online, 30% did so in the store.

Smartphones and tablets now represent 58% of all public Wi-Fi usage, up from 38% in the year-earlier period. By contrast, laptop use has dropped to 42%, reflecting a 12.5% dip from the first half to the second half of 2012.

People tend to use tablets more in hotels and airports, while the portability of smartphones makes them the device of choice in cafes, restaurants, malls and restaurants. The survey pointed to continuing strong demand for tablets. Among tablet owners, 72% said they plan to buy another, with most (75%) eyeing an iPad.

On the JiWire network spanning 315,000 Wi-Fi hotspots, the iPhone, iPad and iPod together accounted for 71% market share. The Samsung Galaxy II and III had just 7.2% and the Kindle Fire, 2.35%.