Is That Ringtone You Hear The Death Knell For Console Gaming? 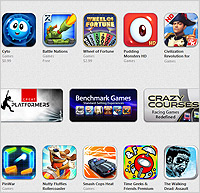 The rising next generation of game consoles such as the current Wii U, upcoming PlayStation 4 and presumed Xbox something-or-other are going to face some serious headwinds in cultivating the developer support that is critical to hardware success. The game writing community is pretty much in the tank now for smartphones and tablets, with dwindling interest in living room consoles and even less in dedicated handhelds.

In advance of the upcoming Game Developer’s Conference, the UBM Tech Network released its GDC 2013 State of the Industry report, which focuses on developers’ plans.

Smartphones and tablets are far and away the most popular development platform now, with 38% of over 2500 respondents saying their most recently released title was for mobile devices and 55% saying that is their target for games currently under development. PCs and Macs are also still strong, with 34.6% of developers saying their most recent title was for the desktop and 48% currently developing another one.

The imbalance is striking. Only 13.2% of developers say they just released an Xbox 360 titles and only 14% are planning one. It declines from there, with even less interest in PlayStation 3 games. Intent to develop a Wii U title is at only 6.4%.

To be fair to the metrics, the low cost of mobile development and the proliferation of small indie developers favors the statistics for mobile. More than half (53%) of respondents considered themselves independent, about half of which have only been in business two years or less. One of the problems with next-gen game consoles is that the hardware requires sophisticated development teams and a depth of investment only a handful of companies really can afford. The proliferation of mobile gaming as a developer sweet spot is coming from both low entry costs and massive possible scale.

Regardless, the center of gravity in game development has moved decidedly to mobile, and specifically smartphones and tablets. The PlayStation Vita and Nintendo DS/3DS both attract low single-digit interest from developers, although both systems have also opened up somewhat to allow small and less expensive mobile-like titles from independent developers.

For marketers the shift in developer emphasis and user time to mobile gaming should be good news. In-game, around game advertising has always struggled to become standardized and gain widespread traction among media buyers. The control of the consoles by a few hardware companies, only one of which ever seemed earnestly pursuing game ad dollars, was frustrating. It was always smart for the right brand to do things like sponsor extra gaming levels and upgrades, but these were interesting custom programs on the whole. Figuring out how to leverage gaming consistently and efficiently as a marketing platform seems to have been an ongoing story for the last 20 years.

I wonder if the dominance of phone and tablet gaming simply allows marketers to get in the game more easily. It is one of the dominant inventory sources for app advertising, and at least one part of the ad mix is already being served into these game titles, display ads that users find at least tolerable. Rewards-based models for them via companies like SessionM, Klip and Tapjoy are integrated into many games. And deeper integrations are simply easier in many of these slimmer titles as well. In-app payment systems have established clear value for incremental gaming experiences, and so advertisers have an easier path to enacting a value exchange for consumer attention.

One of the challenges of console gaming as a marketing platform was that the gaming experience was substantially different from lean-back precedents in the media world. It was hard for advertisers to get in the game without upsetting the flow. In some ways, the appification of gaming on personal screens brings gaming closer to forms and experience that can handle more scalable ad solutions.