The Shelf Life of 'Native': Tumblr Joins the Mobile Tribe 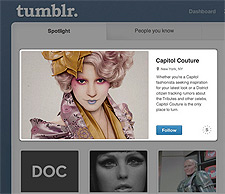 In a no-brainer, what-took-you-so-long move, Tumblr announced via a Bloomberg interview that it would bring its non-advertising ad models from the Web to mobile. Join the gang. Basically following the model of promoted posts that Twitter and Facebook have incorporated of late, Tumblr is really seeing this as content promotion rather than advertising. The idea is to encourage brands to be creative in their posts so that the promotion doesn’t feel like a promotion.

To be sure, some of the early examples of this native ad trend have performed well for marketers, and we even get some glimpses of genuine creativity coming from brands that are taking the format seriously. Somewhere in the concept of native advertising is the laudable concept of non-interruptive forms of marketing that aim to build goodwill, real relationships with consumers, and a tighter weave with people’s deliberate content consumption habits. All well and good.

But one look at my Facebook and Twitter feeds suggest to me that most of these posts still feel like ads. Much of it is way off target -- or so generic in appeal that they are more bothersome than a banner. They force you to push them offscreen. As the systems delivering them become more automated, driven by direct marketing back-end performance metrics, how relevant are they likely to be over the long haul? To what degree will publishers really exercise and power over how advertisers use these formats. Everyone is going into it talking big about creatvitiy, and soft-selling and ads that are not really ads. But come on. How long will this last?

I like the principle of “native advertising,” although what goes under its name now is pretty much going to diffuse its meaning. I have publishers trying to pawn off standard mobile banner ads as “native” simply because they are in the middle of a page.

There are indeed some wonderful examples of brand content publishing projects that enhance the user experience by providing genuinely entertaining and useful content. Personally, I like a lot of the Buzzfeed programs, and Google’s use of real-time Oscars trivia and stats Tweets during that awards show aligned perfectly with their brand and the audience’s need.

But this time next year, when publishers and advertisers refer to “native ad” projects, they likely will have to qualify them as “no, really, these are genuinely ‘native.’”