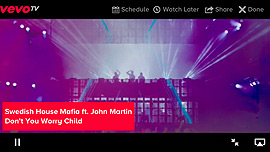 In a major upgrade to its mobile apps, music video superpower Vevo has added a 24/7 live stream of video programming that recalls the early days of MTV. VevoTV will be a broadcast-like experience that includes programming blocks, artist interviews, video premieres, and live concerts. We didn’t see a VJ on hand, but the programming seemed to follow the expected run of musical styles in one-hour blocks.

The revision is current on iOS, Android, and Windows Phone device platforms as well as set-top/game boxes such as Xbox 360 and Roku. The programming is accessible to U.S. and Canadian users with plans to expand the reach internationally soon.

In the app the Vevo TV experience appears as a pull-up tab on the default video-on-demand experience. The user is moved into a video box where she can see upcoming program blocks as well as pause the stream, tag a specific video for watching later, or share through social channels. Launch sponsors for the revised app and Web site include State Farm, adidas Originals, McDonald’s and Red Bull.

It's an interesting retro exercise for an on-demand era. For years, many carriers and providers believed that turning handsets into TVs literally was the form that mobile video would take. There is still that nascent mobile digital TV initiative out there somewhere that eons ago began promising to put TV receivers in every handset to pick up local stations’ live feeds. How many CES and CTIA shows did I attend back in the day where chipmakers and content platforms tried to dazzle me with the experience of TV in my hand?

Verizon’s VCast seemed to mark a turning point in that thinking, when the metrics showed that VOD was the way most people wanted sight, sound and motion on devices. Still, CNN’s app has a live mode that is very handy when there is breaking news. And Dish’s new Hopper with Sling lets me literally tap into my TV channels on phone and iPad wherever I am.

In a genre like music and music video, VOD loses the serendipity of discovery and surprise -- let alone the special vibe of seeing a live musical event as it happens. Within specific content niches like breaking news and music, the live stream may have a purpose. It will be interesting to see how users respond to this revival of a discarded mobile format. As we come to appreciate the lean-back mode at home that is more important to mobile than we first supposed, perhaps old TV models have a place after all.

With presence on its Xbox 360 and Roku apps, we imagine that Vevo still has the big "first screen" clearly in view as well. If and when the model migrates to smart TV apps as well, this gives Vevo essentially an app-based TV channel that any TV owners can turn on and view as they would any other channel. Talk about going "over the top" to do an end run around the MSO.