Saks Trying To Up Its Omnichannel Game 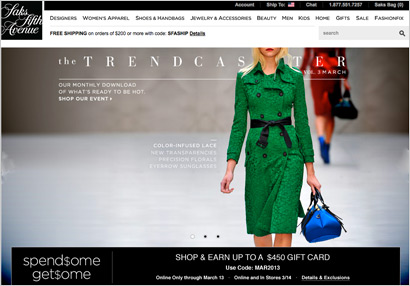 Talk about transitional wear: Saks Fifth Avenue says there are lots of changes afoot, as it moves from multichannel to omnichannel, from classic brands to emerging ones, and from wooing a shopper that feels poorer to one that feels (mostly) in the money.

“We’ve made enormous progress in our 'Project Evolution',” Saks CEO Stephen Sadove told investors in a presentation for the Bank of America Merrill Lynch Retail & Consumer Conference, which was also webcast. In addition to improvements in marketing and merchandising, the new York-based luxury retailer says it’s also raised its customer service scores, and ironed out channel glitches to make the shopping experience more seamless.

“I can’t say enough about the growth at saks.com,” he says. “There’s so much integration between store and online sales that we can’t report the numbers separately, they just don’t make sense because we are moving inventory from one to another all the time. And we feel very good about our site, investing in more photography, more editorial, personalizing the experience and enhancing our mobile capabilities.”

He says the company has also relaunched its loyalty program. “We have done a good job catering to the higher-end customer, but in the past, you needed to spend at least $1,000 to begin earning benefits. Now you can start right away.” And that too, has been an opportunity to make the way shoppers shift from channel to channel easier. “It didn’t make any sense, for example that we’d offer free shipping when buying from the site, but not in stores, so we’ve changed that.”

He says that at the moment, Saks’ core customer is also in transition. While a strong stock market typically augurs well for Saks, “it was a difficult luxury environment, toward the end of last year. For example, we saw a decrease in sales of jewelry priced $75,000 and higher. I think the underlying GDP will be healthy, but I do believe there will be a period of adjustment for high-end consumers. We know they will adjust just fine, but they are in the epicenter of tax changes and we can some uncertainty.”

He says another shift is that the retailer is seeing a slight swing away from classic designers to more emerging brands, “so we are making our offering more relevant.”

And it’s just moved into its second season of the TV show, “Fashion Star.” “That’s simply an indicator that we are making the Saks brands relevant to an emerging audience,” he says, “not just focused on our core customer.”