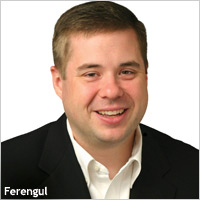 As part of a reorganization of its executive team, rich online media advertising developer Undertone has tapped the top product and strategy executive from over-the-top TV platform Rovi as its first COO. As head of operations, the new executive, Corey Ferengul, will oversee Undertone’s product, ops and marketing functions at a time when the lines between traditional TV advertising and online media are blurring more than ever before.
The move also signals Undertone’s commitment to focusing its product development on brand-oriented advertising formats and services at a time when much of the online ad business seems to be shifting toward performance and programmatic-based executions.
The appointment is interesting, because Ferengul also has consumer marketing chops, While he most recently served as executive vice president-product management and strategy at Rovi, he previously led the company’s marketing and development teams.
Eric Franchi, a co-founder and spokesman at Undertone, added that Ferengul’s experience in the TV industry is not incidental, noting: “For certain, a cross-screen strategy is a big theme for Undertone in 2013 and Corey brings the TV part. Maybe not in 2013, but definitely in 2014 we will be bringing the ability to support that.”
In other key management moves, Undertone promoted Fred Mather to president-sales and operations from chief revenue officer. In his new role, he will be responsible for sales, client services, performance, planning and publisher development functions.
The appointments follow last month’s naming of Cameron Hulett as executive director for Europe, the Middle East, and Africa, and the 2012 appointments of Joseph Del Toro to CFO and Robert Schwartz to senior vice president-corporate strategy and business development.