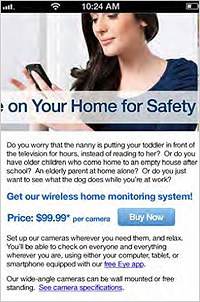 When the U.S. Federal Trade Commission released updated disclosure rules for online advertising this week, much of the coverage focused on the impact on social platforms like Twitter. If a celebrity promotes a product through their Twitter account, for example, he or she would have to disclose that what the user is reading is actually an advertisement.

But Twitter already requires celebrity endorsers and others to disclose that they are being paid. And as Santa Clara University law professor Eric Goldman told Reuters, many of the issues around social media -- including endorsements via Twitter -- were already addressed by the FTC a few years ago when they began emerging.

But a more widespread effect of the FTC’s new truth-in-advertising rules could come with disclosure standards applied to ads on mobile devices. Specifically, the agency said advertisers should make sure their disclosures are “clear and conspicuous” on all devices and platforms on which consumers might see ads.

Meeting that broad directive might require a marketer to develop a mobile-specific site. "Most webpages viewable on desktop devices may also be viewable on smartphones," the FTC stated in the report. "Advertisers should design the website so that any necessary disclosures are clear and conspicuous, regardless of the device on which they are displayed."

It's nothing less than a call for adopting a “mobile-first” strategy -- for responsive design, to ensure a consistent experience across platforms. The FTC, through regulatory means, is encouraging practices that are already being embraced and promoted by leading publishers, brands and agencies involved in the mobile industry.

Marketers, of course, may not see it that way. They may see the rules and guides in the 53-page report as a further burden on their operations that could drive up costs and reduce conversions. The guidelines may also disproportionately affect smaller, direct-response advertisers rather than big brands, whose ads aren’t as likely to include lengthy disclaimers or fine-print offers.

What's more, they could have a dampening effect on mobile advertising overall if marketers decide it’s more trouble than it’s worth to follow the FTC’s recommendations. Or that it will just be harder to fool people. If a disclosure can’t be made clearly and conspicuously on a given platform, the agency says an ad shouldn’t run at all on that platform or device.

The report noted, for example, that consumers might miss disclosures on a smartphone even if they zoom in because of the need to scroll horizontally as well as vertically to see an entire page that hasn’t been tailored to the mobile screen.

In one sample ad for an Internet camera for home monitoring, notice of a $9.99 monthly monitoring fee was buried in the bottom left corner of the page. “As a result, consumers who use a smart phone to view this website, which has not been optimized for mobile devices, might easily miss the monthly monitoring fee disclosure,” the report stated.

But if the FTC guidelines prompt more companies to create mobile-optimized sites and ad landing pages, then that should benefit the industry broadly by creating a better user experience. That in turn could lead to increased investment in mobile advertising and marketing. That’s the argument Google and other companies have been making for some time in pushing for businesses to create mobile versions of their desktop sites.

According to a 2012 study by SMB DigitalScape, 98% of small and medium-sized businesses still don’t have sites optimized for the major mobile operating systems including Android, iOS and BlackBerry. Many brands still lack mobile-friendly sites too. The FTC has just provided another reason for them to go mobile for real.