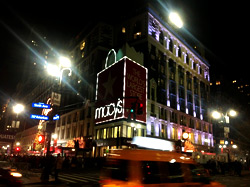 It’s no surprise that Walmart, Target and the Home Depot held on to the top three spots in Interbrand’s new ranking of the Most Valuable Retail Brands in the U.S. The big news is in Amazon shooting up to No. 4, from No. 9 last year, and in Macy’s (No. 40) increasing its brand value 62%, making it this year’s fastest climber.

Amazon is “the brand that other retailers continue to fear,” says Tom Custer, executive director of Interbrand Design Forum, in an email to Marketing Daily. “We’re closely watching its efforts in same-day delivery, which could be a game-changer for the retail industry. And indicative of a trend that is playing out all over the world, Best Buy falls out of the top 10, with a brand value decline of 52%, which puts it at #13 on the list.”

CVS, Coach, Walgreens, Sam’s Club, eBay, and Nordstrom are all in the top 10.

The total brand value of the top 50 brands gained 1.8% this year, with 36 increasing in value, while just 11 declined. On average, the gainers grew by 6% this year, compared to 4% last year.

Interbrand calculates brand value by looking at three components: analysis of financial performance, the role of brand in the purchase decision and the competitive strength of the brand, Custer explains. “As we look at financial performance, it encompasses all touchpoints operating under the retailer’s nameplate. So when we calculate brand strength, a brand with a multichannel offering would typically merit higher scores on certain factors such as responsiveness, presence and relevance.”

That means a relatively “small” brand, such as Coach, can land in the top 10, with a higher brand value than much larger stores. “Brands like Coach are more profitable, grow faster and brand plays a larger role in the decision process than less valuable brands that have much higher revenues,” he says. “The larger the role of brand in the choice of shopping destination, the more value flows to the shareholders due to the brand for a given amount of profits.”

Express, Cabela’s and Anthropologie all made it into the top 50 for the first time, while Toys “R” Us, Abercrombie & Fitch and Advance Auto Parts fell out.

The report also ranks retail brands in other regions, with Lululemon landing in the No. 1 spot in Canada, Uniqlo topping its home market of Japan, Tesco dominating in the U.K., Carrefour in France, and Aldi in Germany.