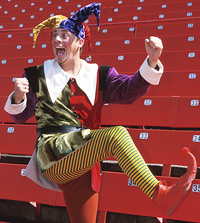 Some of the best April Fools' pranks are based on half truths or possibilities. Several companies, including Virgin, offer some realistic looks at possibilities. While Richard Branson, Virgin Group founder, writes about building a glass-bottomed plane to view the landscape and give a boost to Scottish tourism, Google points to searching for smells and connectiong to fiber poles. Then there are space flights from Unpakt and (no joke) PaeDae.

Google Nose BETA, the company's fictional product featured on the google.com home page, allows consumers to search for smells. In this fictional product, the technology combines "photons with infrasound waves" and "temporarily aligns molecules to emulate a particular scent." The technology supports a "15 million scentibyte database of smells from around the world." Try searching on Google for "wet dog" and explore other smells that people sniffed for through the "mobile aroma indexing program."

Several years ago, as consumers began to digest more digital content into their living rooms through a variety of devices, the technology and entertainment industries discussed ways to make movie watching at home more lifelike. The ideas put viewers in the moment, the environment on the screen through sound from speakers, visuals through screens, and touch through vibrations. Take hold of a wireless control on the Xbox 360 during a shootout and feel it shake, for instance. Scent would incorporate another sense. No joke.

Technology companies began working on gadgets that would release a variety of scents into the living room through sensors, timing and hardware resembling a remote control or a black box. During the movie "Jurassic Park," for example, the jungle scene might trigger scents related to lush damp green foliage.

And for those days when 1 gigabit per second from the home isn't enough speed for Kansas City residents, Google Fiber Poles strategically positioned on city streets aim to provide instant access, similar to power stations at airports, bringing communities together and making technologists less socially awkward.

Unpakt, which aggregates searches on moving companies, aims to make the moving process easier. While the search and booking service supports consumers in the U.S., the company now offers Moonve, a fictional service allowing consumers to book their move to the moon, which may not seem so awkward after learning that marketing company PaeDae (for real) will offer a hiring incentive -- a possible trip into space -- to the perfect software developer willing to come on board.

Along with the $5,000 signing bonus, the candidate will have the opportunity to be sent into space (no joke). After a three-month probationary period at PaeDae, the employee becomes eligible for the Space Flight Challenge, which will involve a hand of single-deck blackjack. The employee will be dealt two random cards. If he or she hits blackjack, they will win a trip to space or $200,000, which is the current cost of the trip. If not, they still get to keep their job and the $5,000 signing bonus.

The company said the investment is well worth it to find a top engineer. "For the quality of engineer that we are looking for, it's an important investment to recruit," according to a company spokesperson. Generally, recruiters cost $30,000 to $40,000 for this kind of position. A company spokesperson said the return on investment saves between $10,000 and 20,000, and it also highlights the core problem that has caused this shortage of talent in the market.

And finally, the guys over at Kenshoo have too much fun with a fictitious tool that helps marketers automatically generate music lyrics. Kenshoo Algo-Rhythm "leverages Dynamic Keyword Insertion to populate catchy songs with relevant industry terms" to keep marketers' campaigns lyrically fresh.

google, search
1 comment about "April Fools' Spoofs And Their Real-Life Counterparts".
Check to receive email when comments are posted.
Next story loading