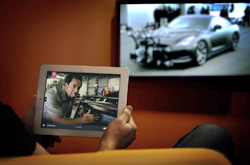 At this weekend’s Video Insider Summit at the Mohonk Mountain House in New Paltz, NY, we had a number of interesting observations regarding the increased role of mobile and devices in the video buying and distribution world. I will be recounting them in greater depth over the next few days. The topic of second-screen experiences came up throughout the three-day deep dive into all aspects of digital sight, sound and motion.

Among the more telling observations came from an agency executive who said, offhandedly, we just don't know yet whether people are using these second screens in any of the ways agencies or TV providers think or want them to. In other words, user willingness to engage in actual second-screen experiences that are in any way synchronized with the first screen remains an open question. The initial habit that most of us observe in ourselves and others is using the second screen as a distraction. Email and social network catch-ups are the most prevalent use cases for many. Unless they have a real firm reason to match up the two displays, people have another use case in mind for their smartphones and tablets when the TV is on.

A great case study from Critical Mass about a second-screen execution of Nissan’s GT Academy sponsorship on Spike TV was a case in point. The show, which is a reality show with Nissan already fully integrated in the content, alerted viewers of the availability of tablet and PC-based complementary content at key moments in the show. Nissan maintains a device-friendly Web app called Pit Pass. Critical Mass, the agency behind the execution, explained that the second-screen content was designed to attract the viewer with good reasons to pull out that second screen. Steve Savic, group ceative director, said: “It was not bonus content, but content that talked to the user as if we were coaching them and putting them into the action."

Some of the short 60-second to 90-second video clips on the tablet/PC gave the viewer insight into how they were filming a given action sequence on the show and others were actually giving them driving tutorials. SVP Amanda Levy added that the additional footage for the second screen was not that expensive at all to add to the mix, although it was exclusively produced for the simultaneous synched experience. While Levy and Savic couldn’t share numbers, they say they got good pickup from viewers. But what was key was the specific call to action from the first screen. They said, for instance, that the promise of instructions about "drifting" received a big spike in second-screen activity because the action-driving technique was so alluring to the audience.

Which is to say that second-screen apps and campaigns need to get beyond the preoccupation with the coolness of the two-screen experience somehow selling itself. And it may also make us wonder whether promising a generalized social TV experience or annotated programming is even good enough. By the way, this is something PBS learned long ago in much of its programming. Long before tablet second screens, its shows had multiple crawls that not only directed people to the PBS.org Web site, but did so in specific sequences during a program with detailed promises of what the user would find there.

If content providers and marketers expect to leverage the second screen, they can’t just expect to pick up viewers who they believe are already using smartphone or tablet while watching TV and want some related trivia or the show’s Twitter stream. They will need to engage people with specific content that makes the lookup worthwhile.