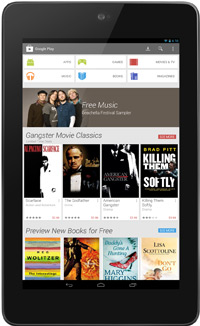 Almost a year after a major overhaul and rebranding of the original Android Marketplace as Google Play, Google has revamped its storefront yet again for smartphones and tablets.

Promising quicker and easier discovery and purchase of apps, music, books and movies, the official Android blog points to the interface's bigger and richer images that fill the screen and “pop off the page.” Content is organized more deliberately around themes, and an endless scroll of more recommendations minimizes new page loads.

Google says it has also streamlined purchasing so that buyers of paid content and renters of films can move more quickly through checkout. The purchase process is something that Android has been working on with special purpose on behalf of developers. Research from third parties consistently shows that iOS apps monetize at a much higher rate than do Android apps. According to research from Canalys, Android is responsible for 51% of app downloads worldwide, but iOS is responsible for 74% of app revenue.

The new Google Play has also rearranged its navigation tabs, collecting them on top of the display instead of the side.

In the U. S. market, Android-based phones continue to hold the lion’s share of the smartphone market (51.7%, according to comScore). But main rival Apple (38.9%) continues to scratch away at that lead, narrowing it from 19.3% last October to 12.8% by Feb. 2013. While more Android phones are in the market than iPhones, both in the U.S. and worldwide, Apple’s iOS is fed both by its iPhone base and its ever-expanding iPad devices.

The new Google Play rolled out to U.S. smartphone owners this week as well as to Android tablets running verson 2.2 and later of the OS. It will go into worldwide distribution in coming weeks.