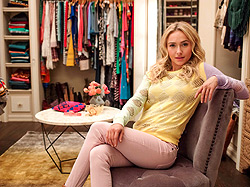 Cotton Inc. is unfurling the latest version of its “The fabric of our lives” campaign, this time starring actress Hayden Panettiere.

The 23-year-old, currently starring as bratty, brilliant country star Juliette Barnes in ABC’s critically acclaimed “Nashville,” appears in 15- and 30-second TV spots. Ads follow her through a series of day-in-the-life vignettes, showing off a wide variety of cotton apparel. She also sings the familiar jingle to the five-year-old campaign, but with a country-and-Western twist.

Panettiere, who starred in soap operas as a child and is best known for her role as the cheerleader in “Heroes,” appears in many spots for Neutrogena, and has been a brand ambassador for it since 2006. In “Nashville,” her character, prone to shoplifting, meltdowns and general bad behavior, struggles to land endorsement deals.

Cotton Inc. says it chose the actress for her crossover appeal as well as her all-American looks, which it says ties in with the American-style theme it has been emphasizing over the past year.

The organization, funded by U.S. cotton producers and importers, says it hopes the spots convey the beauty of denim made from pure cotton.

“The historic rise in cotton prices two years ago, and subsequent erosion of cotton market share owning to the substitution of synthetics in traditionally cotton-dominant apparel, partially influenced the wardrobe selections of the vignettes,” it says in its release.  And while the campaign has focused on cotton as an ingredient in high-end designer apparel since 2008, this version is intended to remind people “that real denim is made from cotton, an idea that suited Hayden’s individual tastes and the contemporary country style of the music.”