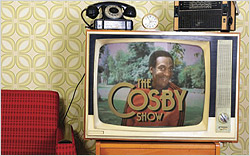 In the spring of 1984, Edsel Ford II, the Ford Motor Co. scion who was then head of marketing for the Detroit auto giant, assembled the top media buyers of his major ad agencies — Y&R, JWT and Wells Rich Greene — to come up with a strategy to help turn around one of the worst sales periods ever in its history.

Ford’s sales and market share were lagging, and the auto marketer wanted to come up with a strategy for the upcoming prime-time network TV upfront advertising marketplace that would help it generate awareness and regain momentum.

During the meeting, the agency executives briefed Ford on the new prime-time schedules unveiled by the Big 3 broadcast networks, analyzed Nielsen TV ratings patterns for the various timeslots the new and returning shows would go into, and watched pilots and clips of the new shows to determine the best opportunities to place the company’s upfront bets.

One of the shows caught Ford’s eye — a pilot for a new family-oriented sitcom starring Bill Cosby — so he turned to his team of media buyers and made a surprising suggestion.

The agency gurus -- all veterans of the upfront network TV marketplace -- proceeded to explain why Ford should not do that, explaining how audience reach builds by dispersing commercials across a broad mix of TV shows. They all agreed that it was not a good idea.

“Are you sure?” Ford asked. He noted that the new sitcom starring Bill Cosby was one that he “wouldn’t mind owning,” adding, “it’s an interesting idea.”

Despite his appeal, the agency execs convinced Ford it wasn’t a prudent strategy.

“The selling share was a 25, and the buying share was probably a 23,” recalls one of the buyers in the room, referring to the percentage of the prime-time audience The Cosby Show was projected to deliver when it joined NBC’s Thursday-night lineup in the fall of 1984.

“It just wasn’t a show that you’d think of making a big investment on,” he noted, adding that the agencies then proceeded to implement a conventional upfront strategy, buying a mix of shows across the networks’ new prime-time schedules.

“Flash ahead six months, and NBC puts this new show on at 8 p.m. and it does a 45 share,” the buyer recalls, adding, “It changed television. And I don’t think anyone who was in that room couldn’t help but look back and wonder what would have happened if we owned three minutes in The Cosby Show and it ended up being a 50 rating.”

The agency execs couldn’t have been more wrong. Had they gone with Ford’s suggestion, they could have bought one of the biggest surprise hits ever in TV history for a fraction of what it would eventually cost when it led NBC’s prime-time schedule.

“No one ever mentioned it again,” says the buyer. “No one ever threw it in our face, but it was very humbling.”

Such are the vagaries of prime-time television, where one breakout hit can transform a network — and potentially,
a smart marketer’s fortunes — the way The Cosby Show did for NBC.

When Bill Cosby started developing the show with producers Marcy Carsey and Tom Werner, NBC had just finished one of its worst seasons ever, and there was talk about the network unraveling altogether.

Only one of its series, The A Team, finished in the top 10 of the Nielsen ratings, and not one of the new series it introduced in the fall of 1983 — shows like Riptide, We Got It Made and Manimals (a series about crime-solving shape-shifters) — was coming back.

It was the low point for NBC and for its programming wunderkind, the late Brandon Tartikoff, who had only taken over the network’s top programming job from Fred Silverman a couple of seasons earlier. But despite NBC’s dismal prime-time performance, Tartikoff seemed surprisingly upbeat as he handed out special T-shirts at a meeting of the network’s affiliated stations that year. The T-shirts had the NBC logo on it, with the words “No Prisoners” emblazoned above it.

The reasons for Tartikoff’s cockniess was Bill Cosby’s new show, which not only was one of the highest-testing pilots ever for the network, it was generating buzz from everyone who saw it.

“It was the only time I remember everyone trying to get a copy of the pilot,” recalls Horst Stipp, a former top research executive at NBC who is now an executive vice president of the Advertising Research Foundation. “The buzz surrounding it was off the charts.”

You wouldn’t know this from the understated way Cosby introduced the show to the affiliates -- as a series about the Huxtables, an upwardly mobile African-American family living in New York’s Brooklyn Heights. “We’re going to tell some jokes,” he said.

In the end, it was Tartikoff and NBC who were laughing their way to the bank when The Cosby Show defied the laws of prime-time TV ratings erosion, proving that breakouts were still possible and a single highly rated series could turn an entire network around.

After premiering on Thursday Sept. 20, 1984, The Cosby Show went on to run for eight seasons, becoming a tentpole for NBC’s entire schedule, and laying the foundation for its “Must-See TV” Thursday night scheduling, which would include some of the highest-rated, most in-demand, and biggest ad-revenue-generating shows in television.