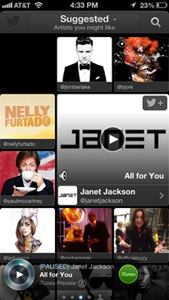 The long-anticipated Twitter music app appeared in the iOS App Store Thursday, and even as a music Neanderthal, I have to say it is pretty impressive out-of-the-box. It may not be as nuanced as one might get from an experienced music content provider that understands genres and various target markets. But I don’t even like music that much compared to other pop-culture forms and I found myself falling into its very engaging discovery engine.

As an app, Twitter Music nails fundamental design principles down cold. It has a fully self-explanatory and visually engaging but simple default interface: a wall of music related thumbnails and Twitter addresses. The most engaging interfaces in my experience are the ones that start at the simplest level and then allow the user to discover deeper detail and richer options with every click. This interface does exactly that. Tap any of the thumbnails and it expands to give you a larger image, a play button, a button to follow the artist, or click through to that artist's profile, again beautifully illustrated with thumbnails of that artist's own social graph.

It is as a sampling app that this really excels. You can find yourself either letting the samples autoplay through the numbered chart of popular or emerging artists or you can click on any of your discoveries either to hear a sample of the track or to click directly into iTunes to purchase it.

I wish I could say that my own social graph was driving music for my own tastes to me. But the sections of the app that were designed to suggest artists I might like or track the music tweeted by the people I know were empty. I think this has more to do with me than with Twitter. Being among the world’s worst tweeters, with a limited following, it is quite possible that none of my own followers have ever tweeted a song. I know I never have. Well, except for the one that I tweeted yesterday to test the app. I’m pretty sure I don’t even recall the artist involved. Okay, I’m pathetic when it comes to music, let’s get beyond that though. When I did follow The Beatles, however, I did get a fair number of retro recommendations as well as some misses (Lisa Presley?).

I think that what we are seeing in this music app from Twitter, however, represents something more significant than just another music discovery app. Here is a social network genuinely focusing on how it becomes a media company. It is taking its own data and crafting unique content experiences that are aligned with business models and marketing initiatives. They have put a lens on their own unruly mass of content and focused it down onto a particular genre where it matters and in a very appealing form. Why shouldn’t this be one of the first places someone goes to discover new music across four key parameters: what is generally popular, what is trending, what is reflective of your declared tastes, and what your friends like? Isn’t this a more interesting chart than Billboard’s?

Perhaps just as important is the fact that this app bridges the gap between Twitter as we have always known it, an unruly and relentless feed of unpredictable posts that requires rapid eye movement to track, and something that the rest of us can relate to. I am just is struck by this app’s ability to take raw Twitter content, which generally makes my eyes glaze over, and put it into a format that I find both edible and sensible.

If Twitter’s aim is to become a media powerhouse, and then this is not a bad start. More to the point, the programmers and marketers on the TV side might want to pay attention. They are next.