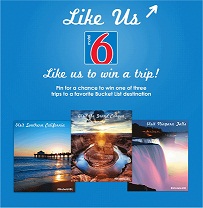 Motel 6 is launching a contest giving three winners the opportunity to check a national U.S. landmark off their personal bucket lists.

The contest, promoted at Ultimate Bucket List Contest, runs through May 21.

"Travel is often at the top of the proverbial bucket list, and Motel 6 wants to make those aspirations a reality for three lucky fans," said Lance Miceli, executive vice president and chief marketing officer for G6 Hospitality, the motel’s parent company, in a release. "We've selected iconic locations across the country and hope this will inspire all travelers to visit their dream destinations."

Each winner can choose a trip for two to southern California, the Grand Canyon National Park or Niagara Falls State Park.

The winners will serve as correspondents on the road, sharing their adventures on social media and inspiring other travel hopefuls along the way. Each grand prize is valued at $6,000 and includes two tablets to make sharing the adventure a breeze.

Consumers can enter on the Motel 6 Facebook page for a chance to win.

Winners will be announced on the Motel 6 Facebook page on June 7. Winners will complete their travels between June 24 and Aug. 31.