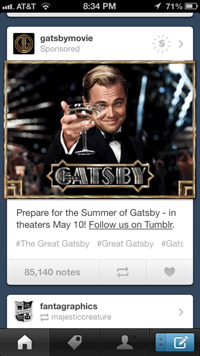 Tumblr is one of those Web services that it seems to me has always played better on handsets than it does on the Web. I find myself lost in the feed of large images and animated GIFs much more in the mobile apps than in the desktop browser. It seems to me a lesson in mobile immersion and focus. Despite the smaller size, mobile allows an image to fill a screen and so the user’s line of focus to dominate their attention in a way that the Web simply does not. There is still so much engineering that a browser brings to the surface and surrounds and diminishes the experience within the main window.

The app gives publishers an opportunity to take over that experience and not have it mediated in quite the same way by Firefox, Internet Explorer or Google Chrome. I maintain that one of the most important ramifications of the smartphone and tablet revolution is that it calls attention to just how visually crappy and experientially fragmented the Web always has been as a media experience.

For native advertising then the mobile app should be especially effective. And that is certainly the case with Tumblr’s sponsored posts within their mobile feed. The company brought the year-old native ad format to its mobile apps yesterday. “We are incredibly proud of our partners’ creativity and then constantly amazed at how well these creations can fit into our Dashboards,” the company said in one of its own in-stream posts to all users yesterday.

And there is something to be said for the ability of a publisher to move advertisers toward the context’s own creative strengths. The first ad that I came upon in my feed was for the upcoming movie "The Great Gatsby." Using the Animated GIFs format that has become so popular in Tumblr, the sponsored post has title character Jay Gatsby, played by the forever boyish Leonardo DiCaprio, raising a glass and toasting the viewer. The ad quickly gathered over 85,000 user notes.

It seems to me that this is native advertising as it should be. The sponsor has absorbed the creative ethos that drives both the publication and the user’s attraction to the platform to begin with. And the content is genuinely fun, just as it is fleeting and unobtrusive. A user may very well want to subscribe to this film's feed because the ad promises that the content could be just as creative.

But more to the point, these are the sorts of native ad projects that help change some of the traditional polarity of the advertising and publishing relationship. This is where we really see marketers challenged by publishers on behalf of users to make their advertising more fun and engaging on the consumer’s terms.

Whatever the limitations and dangers of native advertising may be in confusing editorial with advertising, when done well the net of this movement should be that advertising really does become better than advertising has been.