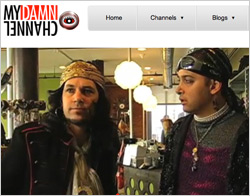 Per the deal, the pair plans to share exclusive first-run distribution for four original comedies, including “Wainy Days” -- about one New Yorker’s adventures in love -- and “Daddy Knows Best,” about perhaps the worst dad on the planet.

These series will premiere simultaneously on Blip and My Damn Channel in exclusive 30-day windows, after which point they will be made available on other outlets, including YouTube.

Sales teams from both Blip and My Damn Channel are expected to represent the new programming with advertisers and agencies targeting 18-34s.

As evidenced by the Newfronts taking place over the next few weeks, the market for original digital content continues to mature and grow.

For his part, Rob Barnett, founder and CEO of My Damn Channel, believes the industry is witnessing a content renaissance. “The past 12 months have been groundbreaking for premium original programming,” he said.

Though still compared to YouTube and other mega-platforms, the partners claim a combined reach of nearly 40 million monthly unique viewers.

Also as part of the pact, select series from the My Damn Channel library will be available via Blip.

Separately, Maria Bamford is joining the My Damn Channel Comedy Network in a new comedy series premiering in May on My Damn Channel and Blip, the partners announced on Wednesday.