New York-based start-up IMRSV today announced the release of their new technology, dubbed Cara. Cara is facial recognition software that turns a camera into a data collector. Reebok and IPG are included in Cara's initial customer base. Jason Sosa, founder and CEO of IMRSV, spoke with RTM Daily about the new technology.

The data collected from the camera is sent, in real-time, to an online dashboard. "There's a [real-time] dashboard for real world spaces," Sosa said. Cara measures three metrics: attention time, duration, and glances. Attention time is how long a consumer was looking in the direction of the camera. Duration is how long a consumer was there but not looking at the camera - a stat that might be higher than advertisers wish. Glances measures how many times a consumer looked away before looking back. 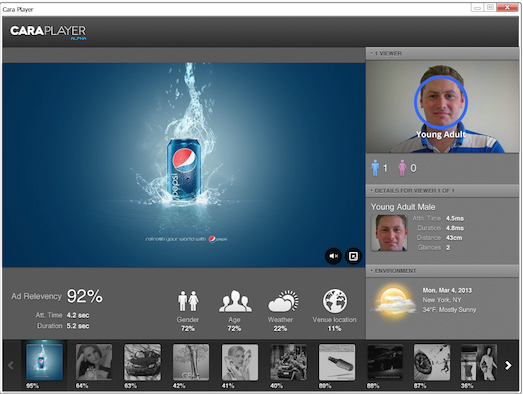 Cara was created because IMRSV believes that offline data and advertising are being largely ignored while they should be a focus. "15 years ago, the Internet was very noisy with tons of irrelevant ads," Sosa said. "The real world today is like the Internet 15 years ago." In an earlier statement, Sosa claimed that 90% of commerce happens out in the physical world.

Sosa believes Cara is unique because it works across real world environments, including different lightning conditions and ethnic groups. "You don't have to be in a confined space," he said. "It works in a real world environment." The technology can track up to 25 people at a time within 25 yards of the camera.

The facial recognition software can also trigger ads or events based on who is in front of the display, Sosa remarked. For example, walking around the mall, a 50-year-old woman could see an entirely different advertisement on a poster than a 25-year-old woman. Sosa said, "[Cara] can make things a lot cleaner and [create] a better experience for everyone, assuming that advertisers and creatives use it in the right way." Sosa and IMRSV claim 92-93% accuracy in terms of demographic recognition.

To those concerned with privacy, Sosa was firm in saying that IMRSV took the necessary steps to maintain consumer anonymity. "It doesn't gather any personal information," he said. "It just gathers demographic data [and] attention time."

According to Sosa, The software does not record images, take pictures, other otherwise make the person in front of the camera identifiable with any truly personal information. Additionally, nobody can sit behind a computer screen and see what the camera sees. While some would argue that gender, age, and location are personal, IMRSV is likely avoiding headaches down the road by being careful with privacy now.

Sosa likened the recognition features (and privacy) of the software to session IDs versus cookies in the online world. The camera will know if a single person stands in front of an ad for 3 minutes, how many times he or she looked in the direction of the camera, and for how long. However, if that same person went out of the picture and then came back in, he or she would count as an entirely new consumer.

Data already collected by Cara suggests that people look at an advertisement for less than one second in the real world. That puts the onus on creative teams to make sure ads stick. It's entirely possible that advertisers will use this type of technology and be sorely disappointed with the results. Regardless, more information about the offline world can only improve offline advertising, especially when it's done in real-time.

Sosa expects Cara to be utilized in places like retail windows for window shoppers, booths at trade shows, grocery stores, malls, and more. He said that governments are interested in this type of tech to "make smarter cities," automotive companies to understand the attention time of drivers, and toy companies to make intelligent toys. "[It's about] understanding the efficiency of offline commerce," he said. "[It's] just pen and paper [now]."

The technology is currently available on Windows and Linux PCs. Sosa said that IMRSV hopes to release the technology on tablet and mobile devices, on both Android and iOS, by the end of the year.

The release of Cara seems well-timed, because it's eerily similar to the Jay Leno gas prank in which a man is talked to directly through a TV screen while pumping gas. That video has since gone viral, which means the general public might be warming up to the idea of ads that speak directly to them.