The Whole Story - How Social Media Is Used

Social Networking has long since ceased to be the preserve of college students and teenagers. Now that the 50+market is truly engaged with Facebook and Pinterest, entire subset of the media and marketing business has effectively sprouted from Mark Zuckerberg’s Harvard dorm room.

This USA TouchPoints analysis looks at how different age cohorts use social media of all kinds on a daily and weekly basis, drawing on a sample that interacts with social media at least once in the average week.

Inevitably, such an analysis prompts further questions relating to devices used, times of day that different groups exhibit different behaviors and so on. These and other questions will be addressed in future analyses. 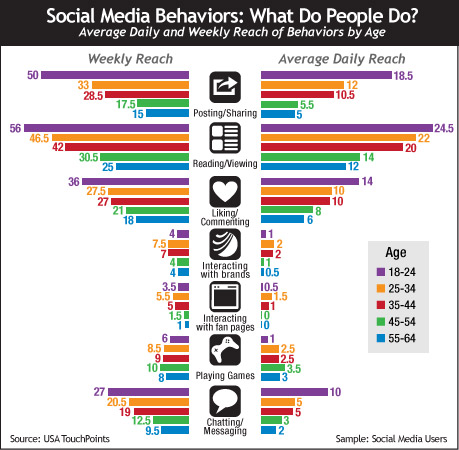 commentary, demographics, social media
1 comment about "The Whole Story - How Social Media Is Used".
Check to receive email when comments are posted.
Next story loading