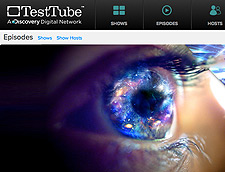 The new ad-supported network will debut with 15 short-form original series, launching with an expected 10 million video views monthly and hoping to get to 20 million by year's end. All this comes from its Revision3 digital unit, which Discovery bought a year ago.

Discovery will also be distributing the new shows on YouTube, Microsoft Xbox, Apple TV, Roku boxes, TiVo DVRs and on smartphones and tablet devices, including iPad, iPhone and Android devices.

TV shows will focus on science-oriented content -- one about human sexuality, "Laci Green’s Sex+", and another that distorts time to show things one might otherwise miss with the human eye another called "Distort." A third examines positive results of catastrophes -- "Thanks Disaster," and there is a "Mythbusters" spinoff.

“Discovery is in the business of igniting curiosity -- from on-air to online -- and for all types of audiences,” stated JB Perrette, chief digital officer of Discovery Communications.

“This is another step in our mission to be the No. 1 nonfiction video and media company on all screens. We’ve doubled our original online video output this year, and are growing new audiences with TestTube and other digital networks that are creating great content that entertains and engages," he added.