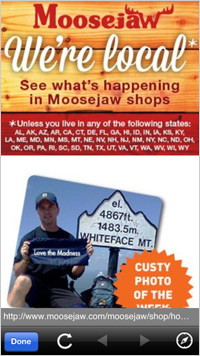 While we regularly see and hear of innovations in how marketers can reach consumers at various stages during their path to purchase, new ideas around location are starting to get richer, as is the location data information.

For example, Moosejaw, the outdoor retail chain headquartered in Michigan, has 11 stores but the majority of sales come from online and mobile.

To better utilize its stores, the company linked its brick and mortar locations to its warehouse inventory, so customers shop the chain’s ‘endless aisle’ where they can see and touch about 5,000 different products but also have direct access to 120,000 products at the warehouse.

In stores in three states, payment terminals were cut in half and 70 percent of all transactions there are completed on a mobile device, according to IBM, whose technology is being used.

And yesterday, during a panel at the MediaPost OMMA Mobile conference in New York, a panelist raised an issue of a different way to factor in location.

The panel was focused on the future of new mobile technologies coming for cars and one of the obvious conversations was around using location-based technologies to offer deals as a driver passed a certain location, a common discussions in mobile circles for more than a decade.

But one of the panelists then suggested that location be leveraged in a different way. For example, rather than targeting the driver at a particular moment while driving, capture data about regular driving routes. The idea would be then to use that information to provide value related to the particular route driven.

Offers then could come in the form of coupons that could be used within a certain timeframe, for example, but not necessarily delivered when the person is driving.

The point is that we are at the very early stages in how to best utilize phone locations to provide the best value to consumers.

The first instinct is typically to target a shopper based on their specific location at a particular moment.

While this can be effective, there may be other opportunities to engage the consumer based on where they have been and what they may have done, in addition to where they are.

Whether using a physical store to encourage in-house showrooming or analyzing past travel patterns to provide future offers, in the end, location rules.

What is the best mobile innovation you've seen or heard about?