Tap Me?: Let's Not Allow NFC To Go Down The Rabbit Hole 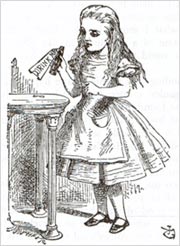 When Alice first finds herself at the bottom of the famous rabbit hole, she sees the White Rabbit scampering down a hallway far too small for her to fit in. Turning away from this postage stamp of a door, she finds a bottle that has appeared on a table, as if by magic: “Round the neck of the bottle was a paper label, with the words ‘DRINK ME’… .”

The scene came to mind this weekend during an evening mall crawl when a slab of digital signage appeared to have along its frame some curious callouts that grabbed my attention. “Tap Here,” it read. “Tap Here” -- with an icon of a smartphone nearby as well as a QR code that recommended you “Scan.”

Lewis Carroll came to mind right away. “It was all very well to say 'Drink me,' but the wise little Alice was not going to do that in a hurry. 'No, I’ll look first,' she said, 'and see if it is marked 'poison' or not;" for she had read several nice little histories about children who had got burnt, and eaten up by wild beasts and other unpleasant things, all because they would not remember the simple rules their friends had taught them…if you drink much from a bottle marked ‘poison’ it is almost certain to disagree with you, sooner or later.”

Relying on the allure of a new technology like near field communication (NFC) as reason enough for a user to engage with a marketer is as lame a practice as it is commonplace. That is not new. And foolishly omitting any indication of what experience the consumer can expect on the other end is just as woefully familiar. It would be a shame to see this bad practice pollute the very promising NFC landscape, however. Here we finally have a technology that activates the physical world but is embedded in the handset for frictionless operation. If we start QR-coding this thing, we could make “tap me” into the same sort of quasi-joke that “scan me” has become for many users.

Worse, in this case the signage is inviting a behavior that most phone owners can’t activate anyway. I was tempted to hang around to see how many people tried bumping their iPhones and most other models up against this thing -- wondering what is wrong with the sign, the phone or both.

Samsung has had a very compelling series of NFC-enabled airport signage that does NFC right, treating it as new and telegraphing what users will get from their tap. In fact, the ads make the case that only owners of certain models have this capability, and so Samsung gets across the exclusivity theme in its branding message.

For reasons that are beyond me, NFC is identified most often with mobile payment schemes when that may be one of the least interesting implementations of the technology for consumers. Done well, with intelligent end experiences synchronized with time and place, the technology has the promise of turning the mobile phone into a virtual mouse onto the physical world.

Alas, it is stuck right now in a chicken-and-egg conundrum where there is not enough scale and awareness in the market to drive apps and physical installations, and so not enough occasions for use among those who have the technology to find it rewarding.

But whether -- and when -- the NFC infrastructure does produce a wonderful new layer of mobile interaction it won’t be from blind date invitations to “tap here.”

The only sensible response to brain-dead marketing prompts like that is, well, “eat me.”

communication, mcommerce, mobile, technology
1 comment about "Tap Me?: Let's Not Allow NFC To Go Down The Rabbit Hole".
Check to receive email when comments are posted.
Next story loading